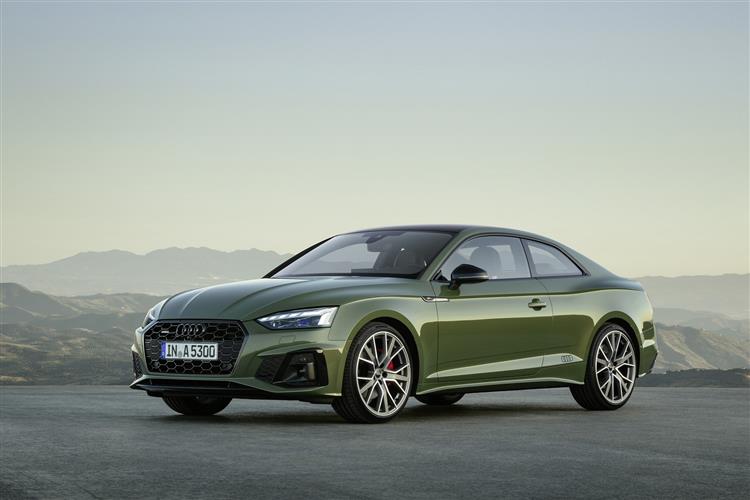 If you accept that the main purpose of Audi's A5 coupe is to provide a welcome alternative to coupe versions of BMW's 4 Series and Mercedes' C-Class, then the importance of the affordable 190PS 40 TFSI variant we're looking at here can hardly be stressed highly enough. Once upon a time, to get 150mph performance from an A5, you had to stretch to one of the pricey 'S5' variants. Here, around £35,000 gets you behind the wheel of a surprisingly quick version of this car. This revised model features a smarter look, an updated cabin and some efficient mild hybrid tech.

Audi's A5 Coupe has been a strong seller or the Ingolstadt brand for some time now but often the entry-level petrol versions tended to be the ones that buyers tried to avoid. With this revised model, the baseline green pump variant could actually be the one to go for, thanks to the introduction of the brand's MHEV mild hybrid technology in the 190PS 2.0 TFSI engine used in the 40 TFSI variant we're looking at here, which also offers quite a turn of speed. It's just one of the changes made to this much improved second generation model. Let's check it out.

Essentially, what the engineers have done with this 40 TFSI model's 2.0-litre TFSI powerplant is to maximise compression efficiency, add in a bit of power and via the non-negotiable S tronic auto transmission - take full advantage of the low first gear ratio that the installation of this 7-speed DSG 'box allowed them to fit. The result is sparkling performance. An A5 Coupe 40 TFSI is capable of 62mph in just 7.3s, en route to 149mph. This engine now features 12-volt MHEV technology, consisting of a belt alternator starter connected to the crankshaft. The system recuperates energy and stores this in a small lithium-ion battery, enabling the start-stop system to operate in a larger window and reducing the amount of effort required by the engine while moving at speed, reducing CO2 and improving fuel economy. As for driving dynamics, well you'd think in this regard that this A5 Coupe would be starting out with a disadvantage over 4 Series Coupe rival. Its front-driven layout will, after all, never reward an enthusiast in quite the same way as a rear-driven BMW. But in originally developing this car, Audi was convinced that it could be made to feel almost as good. To prove the point, three different suspension systems are being offered this time round, two of them passive and one featuring adaptive damping. Whatever your choice, you'll find the set-up firmer than it would be in an equivalent A4 saloon.

Think this improved version of the second generation A5 coupe doesn't look much different to its predecessor? Look again. The exterior has actually been significantly revised, with the front end in particular, delivering considerably more visual impact. The Singleframe honeycomb grille is wider and flatter, and above it ventilation slits reference the classic Audi Sport quattro from 1984. A bold blade forms the lower edge of the bumper, which features larger air inlets. A new sill provides for a slimmer appearance when viewed from the side, while at the rear a diffuser insert with trapezoidal tailpipes makes the car appear wider. Horizontal lines also dominate the interior of these improved A5 models. The large MMI touch display, the control centre of the car's redesigned operating system, is the focal point of the instrument panel and angled slightly toward the driver. It offers a user experience similar to a contemporary smartphone via a 10.1-inch touch display with acoustic feedback which replaces the rotary pushbutton used in previous models. Like all the latest Audis, this one gets the brand's 'Virtual cockpit' instrument binnacle, a 12.3-inch TFT display that replaces the conventional dials. Out back, the boot's well sized, offering a volume of 465-litres, more than you get in BMW and Mercedes rivals. The rear seat has a 40:20:40 split and can be easily folded forward using levers in the luggage compartment. Audi also offers an optional gesture control system for opening the luggage compartment lid via a foot motion.

Prices start at around £35,000 and there are 'Sport', 'S line', 'Edition' and 'Vorsprung' trim levels. Whichever spec you decide upon for your A5 Coupe 40 TFSI, you should find your car to be decently equipped. Personally, we'd avoid S line trim with its sharpened suspension that spoils the supple ride that's one of this car's nicest features. Still, that's up to you. S tronic automatic transmission is standard-fit. You can't have quattro 4WD with this engine - that set-up is a mandatory fitment with the '45 TFSI' version of this engine, but that of course will cost you quite a lot more. Whichever trim level you choose, you should find your car to be decently equipped. Among the features included are xenon headlights with LED daytime running lights and LED rear lights, LED interior lights, the Audi 'MMI radio plus' with a 10.1-inch MMI colour display, Bluetooth, a USB charging function, a three-spoke multifunction steering wheel, the Audi drive select dynamic handling system and Audi 'pre sense city' autonomous braking. Audi is particularly proud of its media connectivity, specifically the 'connect' system that can link to the Internet via the ultrafast LTE network. With the standard Audi smartphone interface, Apple Car Play and Android Auto bring the familiar smartphone environment to the car, if desired. The optional Audiphonebox with wireless charging in the centre armrest uses near-field coupling to link smartphones wirelessly to the vehicle's antenna.

The A5's size, its optional 4x4 transmission and its equipment-laden interior might lead you to fear for its fuel economy but there really is no need with this 40 TFSI variant. Around 42mpg (WLTP) and around 132g/km of CO2 (NEDC) mean reasonable running costs. This is now an MHEV or 'mild hybrid' engine; we'll brief you on what Audi's definition of 'Mild Hybrid' tech actually means; a 'BAS' belt alternator starter-generator that powers a 12-volt main electrical set-up in which a compact lithium-ion battery in the boot stores energy harvested via a 'KERS' kinetic energy recovery system. During braking, the 'BAS' package can recover up to 5kW of power and feed it back into the battery. If the driver takes their foot off the accelerator at speeds between 34 and 99mph, the mild hybrid system will recuperate energy, while the car rolls in idle or coasts with its engine automatically switched off. The belt alternator starter-generator restarts the engine the next time the accelerator is depressed, and does so faster and more gently than a conventional starter. All of this you'll particularly notice at urban speeds where the engine start-stop system is cutting in and out. The start stop range begins at just under 14mph, so you'll often find the car coasting up to the end of a traffic queue, a traffic light or a level crossing.

For most buyers, most of the time, the 190PS 40 TFSI A5 Coupe will be all the car they actually need. Audi will go on selling plenty of the torquier 40 TDI diesel models of course, but the next time you see an entry-level 2.0-litre petrol-powered variant, mark the owner out: they've made a savvy choice. As for the changes made to this revised model, well the MHEV mild hybrid tech doesn't make a huge efficiency difference, but it's a step in the right direction and the cabin's now even classier. If you're browsing in this segment at this price point, this is still a difficult package to resist.