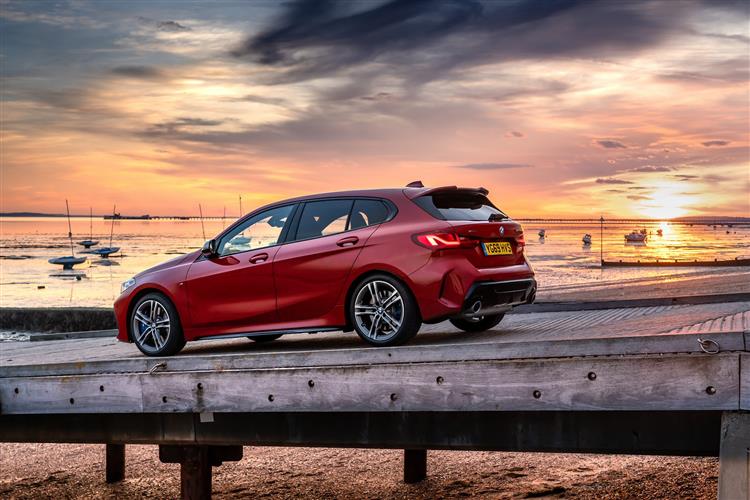 In this modern-era form, BMW's M135i gained xDrive 4WD and a rather different outlook on life from the rear drive M135i and M140i older generation designs that preceded it. In late 2021, the brand added a few dynamic changes to give the car a sharper feel, creating the model we look at here. This Baviarian hot hatch still doesn't have the old school track-style appeal its rear-driven predecessors had, but that's because it's matured a bit. If you have too, then you'll probably rather like it.

New models primarily appeal to those who bought the previous version of the same car - but this one's different. In its previous generation guise, the BMW M135i (later the M140i) was a rather unique hot hatch confection, rear driven with a howling straight six engine - a car for the hot hatch cognoscenti. The sort of model a race track instructor would use as his day-to-day drive. The problem for BMW is that there aren't a lot of those kinds of people. So the M135i has changed - into this, a four cylinder family five-door that's primarily front-driven, with occasional four wheel traction. It's a BMW of the 'M Performance' variety, rather than being a full M car. But it is, the Munich maker insists, despite the change of hot hatch emphasis, a proper sporting BMW. Is it? Let's find out.

So what's different with this lightly revised model? Not too much. BMW has retuned the camber settings, plus a new hydromount has been installed for the front suspension, while the mounts for the trailing and control arms at the rear axle have been revised. The steering's now a little sharper and the engine note is now a little rortier. That's about it. Otherwise, things are as before, which means there's a 2.0-litre four cylinder turbocharged 306hp engine beneath the bonnet, in place of the previous generation model's sonorous 3.0-litre straight six. And AWD in place of that older car's classic rear-driven set-up. The performance on offer (rest to 62mph in 4.8s en route to 155mph) exactly replicates that of the old generation pre-2019 340hp M140i model. And of course, compared to that previous design, this modern-era M135i has the added advantage of standard xDrive 4WD, Launch Control and a mechanical Torsen limited slip differential to get its grip to the gravel. But it's a very different kind of car from before that still these days merely replicates what's on offer from obvious rivals like the Golf R and the Audi S3. There's not the same challenge in driving it that characterised the previous generation pre-2019-era model - but then, you might have expected that. As before with the M135i xDrive, this car differs from lesser 1 Series variants with its stiffer suspension set-up and features a 10mm-lower ride height, with two-stage adaptive dampers being optional. At the front, the subframe features an extra couple of bracing bars for extra steering accuracy and the electrically assisted rack features a quick ratio of 14:1, as opposed to the standard car's 15:1. Finally, the brake master cylinder is bigger than that of a standard 1 Series for better response and more consistent pedal pressure.

As you might expect, the top 'M135i xDrive' variant has its own unique 'M Performance' look. That gives this top variant 18-inch 'M light alloy Double-spoke' wheels with a 'Bicolour' finish and the front, plus the rear bumper styling is bespoke. There's an M rear spoiler, unique side sill covers and a 'Cerium Grey' finish for the exhaust tailpipe, the side M logo, the mirror caps and the frame of the front kidney grille. The M135i interior's set apart by M seat belts and M sports seats with upholstery in 'Trigon' cloth and 'Anthracite' alcantara. Plus this flagship variant comes with the brand's desirable 'Live Cockpit Professional' package, with its 10.25-inch centre-dash and instrument cluster screens and 'Connected Package Professional' additional media connectivity features. Otherwise, the recipe is as with any other 1 Series. This car has the cabin feel of a larger, more luxurious product. Some of that's down to cabin quality - soft-touch surfaces and the sold feel of all the fixtures and fittings matched on a plusher model like this one by things like contrast stitching and intricate 'Extended lighting' door panel strips. Plus you get much more space in the rear and in the boot than with the older generation rear-driven models. Two adults can comfortably fit on the back seats without having to squash in their knees, as was the case with the previous rear driven design. And out back, there's a decently-sized 380-litre boot.

There aren't really any spec changes for this updated M135i xDrive, though you can now specify three extra paint colours ('M Sao Paulo Yellow', 'Frozen Orange' and 'Frozen Pure Grey'. Otherwise, it's as you were. You'll pay just under £38,000 for this M135i xDrive, which is about par for the course if you're looking at cars in this segment - probably models like the Audi S3 Sportback, the Mercedes-AMG A 35, the Renault Megane R.S. and the Honda Civic Type-R. We've detailed all the visual exterior and embellishments you get as part of M135i spec in our 'Design' section. Many 'M135i' buyers upgrade to the optional 'M135i Plus Pack', which includes Sun Protection glass, a harmon/kardon audio upgrade and a choice of two designs of larger Bicolour 19-inch wheel - 'M V-spoke' or 'M Double-spoke'. Bear in mind though, that you can't upgrade to this pack if you specify the optional adaptive damping system - as quite a few customers for this hot hatch are going to want to do. Other options you might want to consider include the 'BMW Icon Adaptive LED headlamps' we tried. The brand also thinks that the optional Head-up display will be popular too. And if you think you or your partner might struggle with slotting this car into tight spaces, you could consider the 'Park Assist' system, which automatically does it for you and includes a Reversing Assist camera. What else? Well the Harmon/Kardon 'Surround Sound' audio set-up is worth a look. Plus a wireless charging mat is available as part of an 'Enhanced Bluetooth with wireless charging' option.

This auto-only petrol hot hatch variant manages up to 38.7mpg and (on 18-inch wheels) 167g/km of CO2 - which puts it amongst the class leaders in this segment when it comes to efficiency. Insurance is a group 36E rating. Routine maintenance is dictated by 'Condition Based Servicing' that monitors oil level and engine wear, taking into account how long it's been and how far the car has travelled since its previous garage visit. You can check all of this using menus in the 'iDrive' centre-dash display; the centre-dash screen's 'Car' section tells you engine oil level, service requirements and (on a diesel model) your AdBlue level. Plus the car will give you four weeks' notice of when a check-up is needed so you have plenty of time to book it. A TeleServices' feature comes as part of the BMW 'ConnectedDrive' services you can also access through the iDrive infotainment system. Via this, before each service appointment is due, your 1 Series can automatically put in a 'TeleServices' call to your nominated BMW service centre, complete with detailed information on vehicle condition. You'll then get a call to arrange a service appointment, something you'll already have budgeted for if, at the point of original purchase, you opted for one of the two fixed cost 'Service Inclusive' or 'Service Inclusive Plus' packages which cover you for five years or 50,000 miles.

What you think of the M135i xDrive depends largely on the expectations you approach it with. It was clearly never intended to be a direct replacement for its six cylinder rear-driven predecessor. But see it as what it is, the Munich maker's alternative to a Golf R, a Mercedes-AMG A 35 or an Audi S3 - and you'll get the point immediately. We're disappointed that BMW no longer offers something so refreshingly, radically different to cars like those. But we can understand why the business case for reversion to a more established uber-fast hot hatch formula was so compelling. Compelling isn't the first word that springs to mind when considering the drive experience this car serves up, but it's undeniably impressive. Traction out of corners, that thing you had to fight for in the old rear-driven model on damp roads, is superb. And the four cylinder powerplant makes up for in willingness what it lacks in authentic howling character. For the first time, here's a really quick 1 Series model you could easily justify to the family. The M135i may no longer be a unique confection. But these days, it's an undeniably more complete one.