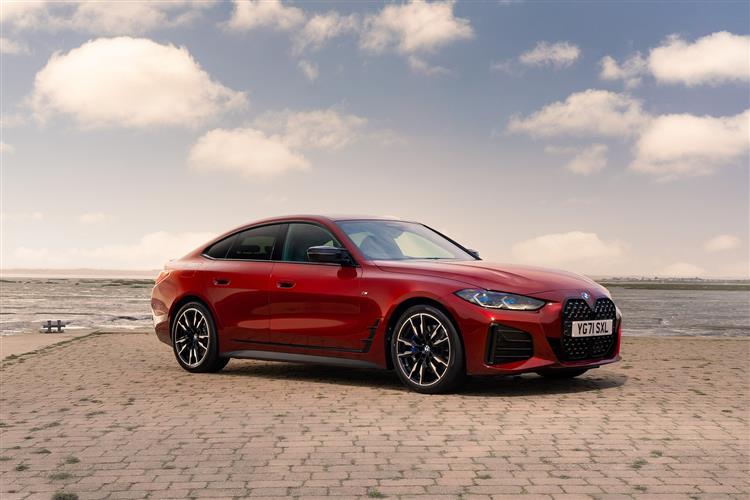 BMW's second generation 4 Series Gran Coupe offers a more flexibly stylish choice in the profitable sector for premium badged Gran Turismo-style mid-sized executive cars. For once, two rear doors don't compromise the visual appeal of a model of this kind, nor does their extra weight dilute the handling purity. Of course, there are more practical choices in this segment - and certainly cheaper ones. After trying this BMW though, you might not be quite so attracted to them. For brand enthusiasts, there's certainly plenty to like.

Electric cars are the future. But, for most people, not quite yet. Which is why at present, we find ourselves in this curious hinterland where brands must build, design and market the same kind of car both in combustion form and as an EV. Take the model in question here, the second generation version of BMW's 4 Series Gran Coupe. It's a GT-style mid-sized premium executive challenger; just like the brand's i4, launched at about the same time, based on the same CLAR platform and built at the same Munich factory. To be fair, the 4 Series Gran Coupe is a hatch, whereas the i4 is a saloon. And its interior's different from the i4 because the front of cabin design borrows everything from the two other 4 Series models BMW offers, the two-door Coupe and the Convertible. As with those two cars, the Munich maker has worked harder this time round to make both the styling and the drive experience more distinct from the closely related 3 Series model. Let's find out more.

BMW claims the differences with this MK2 4 Series Gran Coupe are more than skin deep and will be equally evident in terms of drive dynamics. The chassis has been extensively tweaked over that of the 3 Series and there's a wider track rear track that gives this car a 21mm lower centre of gravity than its showroom stablemate. Plus as usual, there's rear wheel drive (and optional xDrive 4WD) and classic 50:50 weight distribution. And that's just the start. The body and suspension mountings are stiffer and on standard suspension, this '4' rides 10mm lower than a '3'. There are firmer springs and anti-roll bars and clever lift-related dampers reduce body movement and sharpen corner turn in. Plus there's a freshly developed double-jointed spring-strut front suspension and a 5-link rear axle. Engine-wise, the key news is introduction of 48V mild hybrid tech for the 2.0-litre 184hp diesel engine in the volume 420d. The same mild hybrid tech also features with the quickest conventional petrol variant too, the six cylinder 374hp M440i xDrive. A flagship M4 model will follow. Two conventional 2.0-litre petrol turbo versions also feature, the 420i (184hp) and the 430i (258hp). All the engines link up as standard with eight-speed Steptronic auto transmission, which can now be specified with a new optional Sprint function.

As with the Coupe and Convertible 4 Series models, the big talking point here is BMW's controversial large kidney grille. We also ought to be talking about the fact that this is now a slightly larger car, 143mm longer than its predecessor and also fractionally wider and taller, with a wider track. Like its showroom cousins, this car gets an aerodynamically optimised design that includes a completely sealed underbody and an air flap control system in the grille. The CLAR mixed steel-and-alloy platform that underpinned the previous version of this car is retained, but BMW has tried to reduce its weight through greater use of aluminium panels. Inside, the cabin follows some of the latest BMW design trends, with a revised dash layout including a smarter drive selector and a start button in the centre console. The 'BMW Live Cockpit Professional' dash set-up is standard, offering a fully digital screen layout that gives you a high-resolution 12.3-inch instrument cluster behind the steering wheel and a 10.25-inch iDrive infotainment Central Control Display. There are also re-designed sports seats and the option of a revised head-up display.

Sporty 'M Sport' trim is standardised this time round and prices start from around £40,000 for the entry-level 420i. There's a further £2,500 premium if you want the 420d diesel version - which can be had with xDrive 4WD for another £1,500 more. You're looking at around £45,000 for a 430i. And think in terms of around £55,000 if you want the M440i xDrive model. As an option, there's an 'M Sport Pro' package which includes a special 'Sprint' function for additional bursts of speed and a sporty engine soundtrack in the cabin when the 'SPORT' driving mode is activated. Plus you get M sport brakes, 19-inch 'M light' alloy wheels, a rear spoiler in a high-gloss black, BMW individual high-gloss 'Shadowline' trim with extended features and BMW individual lights and M seat belts. You might also be interested in a browse through the M Performance Parts portfolio, from which you can order things like 20-inch M Performance forged light alloy wheels in a Y-spoke design with a Jet Black matt finish. Or maybe a carbon fibre finish for the front grille, front splitter and side skirts, as well as aero flicks for the front apron in high-gloss black.

Mild hybrid technology has been included with all diesel engines and with the straight-six petrol unit of the flagship BMW M440i xDrive Gran Coupe. Fitting a 48V starter-generator and second battery greatly increases the scope for utilising Brake Energy Regeneration and the electrical power it produces. The recuperated energy collected by the 48V battery can be supplied to the 12V electrical system or used for generating additional drive power when fed back to the 48V starter-generator. When the car is accelerating, the generator is also able to offer the driver an electric boost effect that instantly makes an extra 11hp available. All of which should promise a competitive set of efficiency stats, though they're way down on what you'd get from an identically-engined 4 Series 2-door Coupe. We'll start with the petrol models. The 420i manages up to 42.8mpg on the combined cycle and up to 150g/km of CO2. For the 430i version, the figures are up to 41.5mpg and up to 156g/km. For the M440i xDrive, the figures are up to 35.3mpg and up to 181g/km. What about the diesels? For the 420d, the official figures are up 58.9mpg and up to 126g/km. For the 420d xDrive version, it's up to 55.4mpg and up to 133g/km.

One great car can create many such models. Certainly, there seems to be an almost never-ending series of ways that BMW can use the underpinnings of their segment-defining 3 Series saloon to suit ever-changing customer preferences. Here perhaps, in this good looking second generation 4 Series Gran Coupe, we have the most appealing example yet of what this Munich maker can do in the mid-sized executive segment. Not all cars that claim to be 'coupes' are stylish enough to really deserve that title - particularly those that must also accommodate two rear passenger doors. This improved Gran Coupe though, wears its badge credibly yet still offers enough practicality to justify its existence. Overall, if you're looking at buying a conventional premium badged mid-sized executive model, you may well not already have this Gran Coupe on your wish list. If so, then perhaps it ought to be. After all, just for once, the kind of car you've dreamed about may also need to be the one you really need to choose.