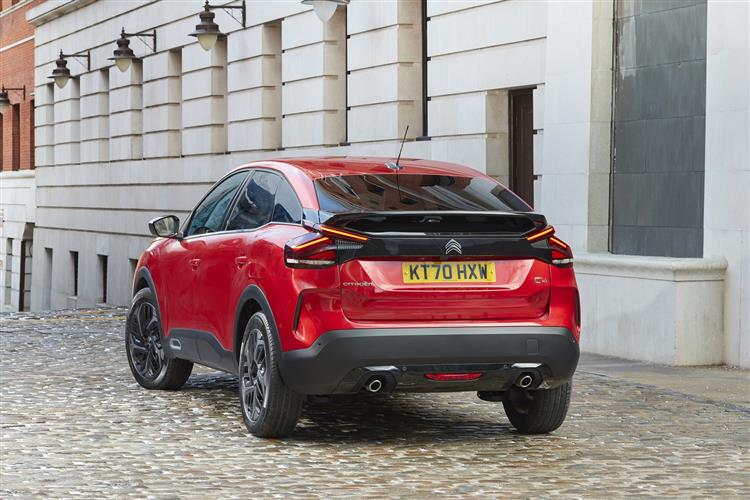 This third generation C4 is a far more creditable offering for Citroen in the family hatchback sector. And, the French brand hopes, can play its part in rejuvenating this segment by integrating SUV style and the option of full electric power into traditional family hatch design. Plus there's a clever suspension system to make this contender feel really Citroen-esque.

"This car", says Citroen CEO Vincent Cobee, "is Citroen to the core", this third generation C4 model's task being to return the brand to credibility in the Focus and Golf-dominated family hatch sector. The last C4, launched in 2010, wasn't particularly Citroen and wasn't particular successful either, selling mainly on low price - and towards the end of its life not even on that. In 2017, Citroen tried to replace it with an evolved family hatch-orientated version of its C4 Cactus crossover, but that didn't work either. This third generation C4, launched in mid-2020, plugs plays the crossover card too in terms of some aspects of its visual appeal, but unlike with the outgoing C4 Cactus, in buying one, you won't feel you're being forced into an SUV rather against your will. Instead, this C4 plays to the things people tend to like about Citroen - innovative design, a distinctive feel and exemplary ride quality. Plus there's an all-electric e-C4 version too.

Citroen hopes that the way this car drives is what will sell it to you - or more specifically, the way this car rides. Like the outgoing C4 Cactus, it features a clever Progressive Hydraulic suspension set-up. Here, the car's springs and shock absorbers work in concert with hydraulic compression and rebound stops, which are supposed to slow body movement over bumps and tarmac tears. You'll want to know about the engines. There's the brand's usual PureTech 1.2-litre 3 cylinder petrol unit, available in three states of tune with 100, 130 or 155hp options. All variants will be front driven, with more powerful models available with an 8-speed auto gearbox. Citroen also offers its usual 1.5-litre BlueHDi diesel, available either with a 6-speed manual gearbox (in 110hp guise) or an 8-speed automatic (in 130hp form). New for the C4 range this time round is an all-electric version, the e-C4, which uses a 50kWh battery powering an electric motor and developing 135hp. It can make 62mph from rest in 9.7 seconds and go on to a top speed of 93mph, but the more important stat is this model's ability to cover a WLTP-rated range of 217 miles on a single charge. To boost this capability, the car can recover energy when decelerating or braking. And there are three drive modes - 'Eco', 'Normal' and 'Sport' - that can vary the level of engine power and the energy draw from the air conditioning to boost driving range.

What this MK3 C4 does beyond any doubt is to confirm that the delineating line between family hatch and compact SUV design is being ever more blurred. Which many folk in search of a compact hatch will think to be no bad thing. Citroen says the crossover cues aren't for crossover purposes. The higher-than-Focus-class-average 156mm ride height is there to offer a high vantage point and better all-round visibility. The matte black-finished wheel arches aren't for arduous tracks but to prevent supermarket car park dings. And there's plenty of signature Citroen design, with stylishly-shaped signature lights and chromed Chevrons that stretch across the car's width. Plus there's and an air intake grille featuring a pattern first seen on the brand's recent 19_19 concept car. Inside, the dash gets the kind of big 10-inch centre touchscreen that's in current vogue. And a fully digitalised instrument binnacle. Thankfully, unlike with the old C4 Cactus, the climate controls are separated out from the screen on the centre stack. Six interior colour schemes are on offer, all aimed at making you feel as 'if you're in your living room'. For the rear seat, the brand claims best-in-class knee room and offers a wide range of storage compartments. Plus there's a decently-sized 380-litre boot, whatever powertrain you prefer.

Right, let's get to prices, which from the launch of this car were pitched in the £21,000 to £28,000 bracket for the combustion-engined models. You'll need a fair bit more for an equivalently-trimmed all-electric e-C4 of course; at the time of this test in Spring 2021, prospective customers for that variant were being asked to pay somewhere in the £31,000 to £32,500 bracket, following subtraction of the £2,500 Government Plug-in Car Grant. There's just a single five-door body shape (the first generation C4 could also be had as a 3-door Coupe) but there's plenty of spec choice. The feeblest combustion PureTech 100 petrol and BlueHDi 110 diesel engines can be had with an entry 'Sense' standard of trim but otherwise, both combustion and electric C4s are sold with a choice of four trim levels - 'Sense', 'Sense Plus', 'Shine' or top 'Shine Plus'. Most will want the mid-range 'Sense Plus' or 'Shine' trim levels, which focus on the engines Citroen think most customers will want. The majority will be looking at the PureTech 130 petrol engine, with most likely to want to stump up the extra £1,400 the brand wants for the EAT8 8-speed automatic transmission that really suits this car, a gearbox you'll have to have if you want this petrol engine in the perkier 155hp form that's available with the top two levels of trim. Alternatives to PureTech petrol power cost more. Around £800 more if you want the BlueHDi 110hp manual model over a PureTech 130 manual. Or around £1,500 more if you want the BlueHDi 130 auto model over a PureTech 130 auto. Incidentally, the difference between a PureTech 130 auto model and an equivalently-trimmed electric e-C4 (which of course is also an auto) is nearly £6,000.

So, petrol or electric? Of course, to make a proper judgement, you're going to need to peruse the combustion model efficiency figures - which are very class-competitive. The volume PureTech 130 EAT auto C4 variant returns up to 50.3mpg on the combined cycle and up to 130g/km of CO2 - or up to 54.7mpg and up to 120g/km in manual gearbox form. With the PureTech 155 auto model, the figures are up to 48.8mpg and up to 133g/km. As for the BlueHDi diesel versions, well to give you an idea, a plush 'Shine'-spec BlueHDi 130 EAT8 auto model manages up to 64.5mpg and up to 120g/km. And electric? Well, the Department of Transport tells us that the average motorist in the UK covers 7,400 miles a year, which is the kind of mileage that would cost an e-C4 owner somewhere between £200 and £300 in added electricity charges, powering up from a typical 7.4kW garage wallbox on off peak rates, the variance depending on driving style and different electricity prices (we've assumed 11p per kWh). The same annual mileage in this PureTech petrol model would work out to somewhere between £750 and £820 - and you'd have to factor in more expensive annual garage servicing too. With a 7.4kW wallbox in place, a charge from empty with an e-C4 would take seven and a half hours with a single-phase supply. Out and about in an e-C4, the 7kW or 11kW public chargers you might come across won't be much quicker than your garage wallbox, but if you can find a 20kW public terminal, you'll be able to replenish your battery at the rate of 87 miles of charge for every hour you're sat cabled up. The gutsier 100kW Rapid chargers that are just starting to be installed on motorways are rare, but there are more of them in Europe and if you can find one, you'll be able to just an 80% charge in just 30 minutes.

All the ingredients for a strong showing are here as this third generation C4 nods to the two currently trending themes of crossover style and electrified power. Yet delivers them within a family hatchback package that traditional buyers in this segment can be comfortable with - quite literally, thanks to the Progressive Hydraulic Suspension set-up. The French maker thinks this sector is 'right for changes' and this car delivers them without getting carried away with innovation, as its C4 Cactus predecessor rather did. And it's obviously significant that within the range lies the brand's first credible full-electric model. Ultimately though, what really matters is that what we have here is a proper Citroen - with all that means. Thank goodness for that.