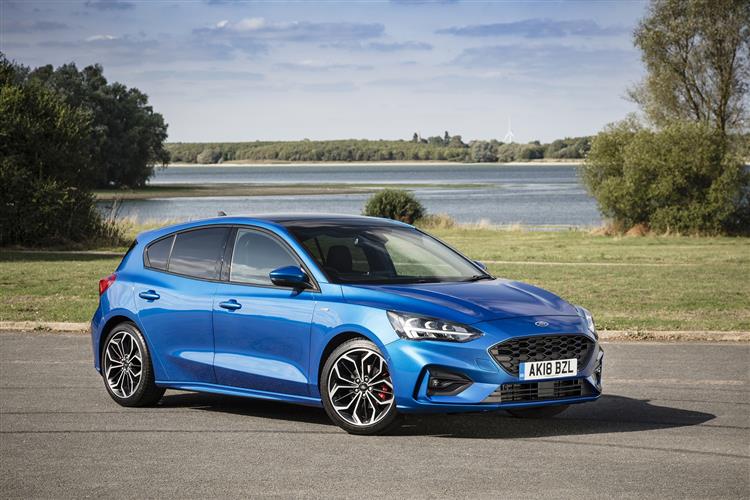 The fourth generation 'C519'-series Ford Focus launched in 2018 put its maker right back into contention in the family hatchback segment, with smarter looks, much improved interior quality and extra technology. There was also greater efficiency beneath the bonnet from a completely rejuvenated range of engines and what Ford claimed to be class-leading levels of safety. The best part though, was that this car still remained as rewarding to drive as it had always been. The Focus might have grown up in this form, but it certainly didn't lose its spark. Here, we look at the early 2018-2021-era models.

It's very difficult to over-state the importance of the Focus family hatch to Ford's European business. By the time of the launch of this 'C519'-series MK4 design in 2018, it had been on sale for over two decades with 16 million global sales. For our part of the world, it had proved to be the company's most important market offering since the Model T. To understand this fourth generation version's significance, we'll need to press the rewind button for a moment and shuttle back to 1997. Ford's family hatch contender during this period was the fifth generation Escort, a car so all-encompassingly woeful that the brand was almost embarrassed to sell it. When the time came for a replacement, everyone expected something better. But what we got in the Focus model first launched in 1998 was something much, much more than that, a contender that, at a stroke, offered arguably the biggest step forward in family car design the market had ever seen. Here at last was technology directed firmly at the man in the street who, in this apparently humble family hatchback, could experience a car more entertaining and rewarding to drive than almost anything this side of a sizeable lottery win. It was asking a lot for the MK2 model we saw in 2005 to repeat such a seismic step forward but that second generation Focus was still quite good enough to remain acclaimed as the driver's choice against rival Astras and Golfs that made up for their dynamic failings with a better ride and a more luxurious big car feel. These were attributes the Focus needed too and when it came to developing the MK3 version, first launched early in 2011, then updated in 2015, Ford tried to provide them without compromising the car's class-leading handling. That was also the goal with this more sophisticated MK4 model, announced in the Spring of 2018. It was about the same size as before and though the lighter, stronger bodywork didn't look too different, it clothed an all-new C2 platform that enabled a longer wheelbase that for the first time allowed this car to offer properly class-competitive rear seat room and luggage space. Much had changed beneath the bonnet too, with clever cylinder deactivation for the petrol models and the all-new 1.5-litre three cylinder petrol unit we'd first seen in the Fiesta ST. The diesel engines were new too. So was the much higher quality cabin which featured half the number of previous buttons. On top of all that, the brand claimed class-leading camera-driven safety standards too. This car did, in short, promise the kind of significant step forward that was absolutely necessary for Ford if the brand was to retain its place amongst the sales leaders in this segment. This MK4 Focus was updated with a mild hybrid version of the 1.0-litre EcoBoost petrol unit in 2020; then fully facelifted at the end of 2021. It's the pre-facelift 2018-2021-era models we look at here.

Here's a car that in this MK4 form certainly grew up - matured - in almost every way. You might, like us, wish that Ford had been a touch more adventurous about this fourth generation Focus model's design, but you can see at a glance that it better meets the key criteria for the kind of car a family hatchback should be. The wheels are further apart, the glass area's larger, the overhangs shorter, all of this part of the brand's 'human-centric' design philosophy. To some extent, that works. Put this 'C519'-series Focus next to its pre-2018 'C346'-series predecessor and it certainly looks a more expensive proposition. There was also an estate model as an alternative to the usual five-door hatch. Inside, Ford hoped buyers would find the ambiance of this fourth generation model much more inviting. To that end, the dashboard was pulled forward and there was a slimmer, lower centre console, plus the new body shell freed up more room for shoulders and knees. As a result, you no longer feel quite so hemmed-in at the wheel, but by the same token, there's also slightly less of the cockpit-style positioning that we rather liked before. You can't fault the cleaner, sharper ergonomics though, aided by a massive 50% reduction in button clutter, with as many functions as possible relocated to the cabin's prominent SYNC 3 infotainment screen that, in keeping with current automotive fashion, sprouts from the top of the dash. All of which is interesting - but perhaps not quite so fundamentally significant as the changes which took place further back in this fourth generation model. The space on offer here certainly doesn't redefine what the family hatchback segment can offer, but at the launch of this MK4 model, it did at least begin to typify it. In a Focus, back seat folk were with this fourth generation design treated much as they would be in a rival Golf, thanks to 56mm more knee clearance, 78mm more legroom and 60mm more shoulder room. The boot also upgraded itself to meet the class standard in 2018, offering 341-litres of capacity if you load to window level - or 375-litres with a tyre repair kit fitted. A typically-specified estate model fitted with a mini-spare offers up to 575-litres. Fold down the 60:40-split rear backrest and between 1,250 and 1,320-litres of space can be freed up in the hatch model, depending on the size of spare wheel the car in question uses. An estate fitted with a mini-spare will give you up to 1,620-litres.

What to Look For

As usual with a family hatch, check the interior for child damage. And with top-spec versions, check the alloy wheels for scratches. Look for any dents, dings and scratches to the panelwork - 'base 'Style' and 'Zetec' models didn't get parking sensors, so may be more susceptible here. And ensure that the clutch engages smoothly and that the car goes into gear easily. The 1.5-litre diesel engine is fitted with a diesel particulate filter, but this may be clogged up if the previous owner hasn't completed too many highway journeys. There were a few recalls that should have been applied to any early MK4 Focus models you might be looking at. On some cars built towards the end of 2018, the brake pedal hinge may not be to specification. And some owners of early 1.0-litre and 1.5-litre petrol models were getting a warning message for the particulate filter incorrectly stating it to be full; this required a dealer trip to reprogram the system. Some cars built between April and August 2018 had issues with the rear child locks; there were some front suspension bolt issues on cars made between September and November 2018; there were some wiring loom recall issues between March 2018 and March 2020; an issue with the power distribution box on some cars made in October 2019; and some seat belt anchorage issues on cars made between May and September 2019. Insist on a fully stamped-up service history and you'll know that all of these recall issues have been attended to.

This fourth generation Focus, like its predecessors, has a reputation as a family hatchback with the ability to entertain at the wheel - and if you enjoy your driving, that's something you'll appreciate pretty early on the first time you try one. Twenty years ago, the original version of this model achieved much the same thing by standardising advanced multi-link rear suspension across its model line-up. With this MK4 model, you only get that on the most powerful 1.5-litre EcoBoost petrol and 2.0-litre EcoBlue diesel variants. If, on the other hand, you go for the 1.5-litre EcoBlue diesel or, more likely, the 1.0-litre EcoBoost petrol engine, then the damping's a little different. These volume models come with a much less sophisticated torsion beam arrangement, though Ford embellished it with the clever 'force vectoring' rear axle springs that it first developed for its Fiesta ST hot hatch. As a result, the ride isn't overly firm, but body control through the bends is still exemplary, allowing you at the wheel to make the most of the stiff C2 platform, the feelsome power steering and the torque vectoring control system that helps you get the power down through the bends. It all combines to create a car that really can still reward at the wheel, even in its most affordable forms: there's still nothing else in the segment from this period that feels quite the same. Yet it still does the sensible stuff well too, being decently refined, with confident braking and a lovely tactile gearshift. Efficiency's up to scratch, even if you select one of the mainstream petrol engines, all of which are three cylinders in size. Most tend to go for the 1.0-litre unit, offered with either 85, 100 or 125PS. The latter option manages 58.9mpg on the combined cycle and 108g/km of CO2 (both NEDC figures). That's providing you select the most frugal of the three provided standard driving modes - 'Eco'. 'Normal' and 'Sport' settings are also available. The quicker powerplants were available with the option of Ford's 8-speed auto gearbox, which adapts to your driving style.

Has any car had more of an impact on modern era motoring than the Ford Focus? Other family hatchbacks from this era can better the fourth generation version of this car in some regards, but they still can't make their family hatchback contenders drive like a Focus. It's true that there are some caveats in that regard. The lower-powered models with their more basic torsion beam suspension set-up don't have quite as fluid a feel as those further up the range that feature the 'control blade' multi-link rear damping system. Even in its most basic form though, this Focus remains an entertainer at heart, a car you'll feel at one with thanks to its progressive body control and steering precision. As a result, it's still a default pick amongst family hatchbacks from the 2018-2021 period if you like your driving. But not everyone does. Many family hatchback folk are buying a car of this kind simply because it ticks the right boxes for safety, practicality and running costs and we've a suspicion that it's these people who'll have their perceptions most changed by this much improved MK4 model. They may, like us, wonder why it couldn't have been just a touch more visually interesting. And wish for a slightly more classy cabin. But they'll certainly like the responsively frugal new-generation engines, the higher safety standards, the improved quality and the fact that at long last in a Focus, there's decent rear passenger and luggage space. In short, if you can afford the asking prices, you'll find that here's a family hatchback that in this form has its priorities right, a car that grew up on MK4 form, but one that in this guise still knew how to enjoy itself. Smarter and more sensible, it was, more than ever, number one for a reason.