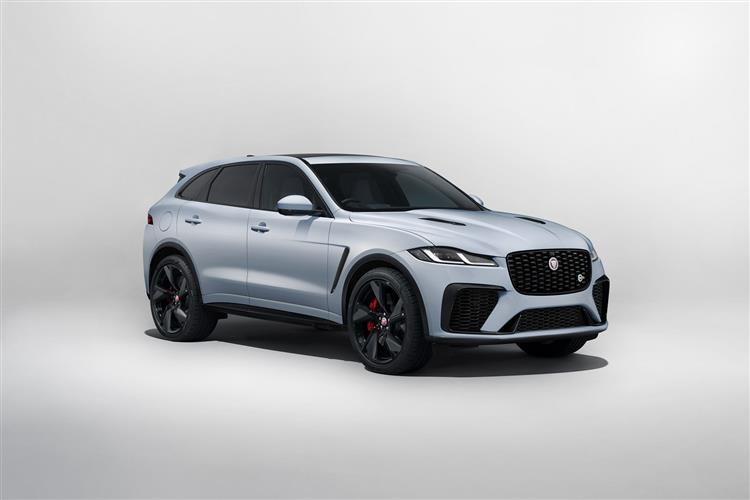 The F-PACE has taken Jaguar in a bold and different direction and this updated version is a further step forward. With an assertive new exterior, a beautifully crafted all-new interior, latest generation Pivi Pro infotainment and the choice of in-line four and six-cylinder engines including PHEV and MHEV technology, this latest Jaguar F-PACE is more luxurious, connected and efficient.

If there's one type of car that epitomises this period in motoring history, it's the SUV. So many buyers desire them and Jaguar wants a slice of this action. As a result back in 2015, the British company brought us its first ever model of this kind, the F-PACE, complete with high-riding driving position, four-wheel drive and even some decent off-road ability. Five years on, it was updated to create the car we're going to look at here. Lower range models are pitched against desirable versions of prestige-branded compact SUVs like BMW's X3 and Audi's Q5, while quicker F-PACE variants must match up against the likes of benchmark performance models in this segment like Porsche's Macan and AMG versions of the Mercedes GLC. All of this requires Jaguar's mid-sized SUV to be more than merely very good: it has to be brilliant. Is it? Let's find out.

The F-PACE is still arguably the best car in its class to drive, helped by its lightweight aluminium underpinnings; it's certainly the best to ride in. But much has changed beneath the bonnet. The engine range here has been completely overhauled and only one of the powerplants now on offer - the base 250PS P300 four cylinder petrol unit - fails to be in some way electrified. All the diesels now feature the brand's MHEV mild Hybrid tech. There are a couple of 2.0-litre diesels, the D165 (163PS) and the D200 (204PS). Plus a 3.0-litre six cylinder diesel, the D300 (300PS). Mild Hybrid tech also features in the mid-range petrol model, the P400 (400PS), which has a six cylinder 3.0-litre engine. The priciest variant, the PHEV Plug-in Hybrid P400e version, uses a 2.0-litre petrol unit with 404PS and 640Nm of pulling power mated to a 105kW electric motor powered by a 17.1kWh battery. 62mph from rest in the P400e takes just 5.0s and when fully charged, the car can offer up to 33 miles of WLTP-rated all-electric driving range. If you want to go faster, there's also a supercharged V8 petrol-powered SVR performance flagship model offering 550PS. This features a revised torque curve that raises peak output to 700Nm and powers the F-PACE SVR to a 178mph top speed. Heightened torque output and a new Dynamic Launch function cut the 0-60mph time by three-tenths of a second to just 3.8 seconds. The SVR also gets a new steering rack with SV calibration and retuned dampers deliver a more connected driving experience, with enhanced ride refinement. All engines are paired with Jaguar's eight-speed automatic gearbox, which can be controlled using the steering wheel shift paddles for added driver engagement. All-wheel drive is standard across all F-PACE models and Intelligent Driveline Dynamics provides rear-wheel drive biased performance, with the ability to vary torque to individual axles almost instantly depending on conditions. The chassis has been updated to support the introduction of the new electrified engines And there's an updated version of the 'JaguarDrive Control' suite of driving modes. Here, 'Comfort', 'Eco', 'Rain-Ice-Snow' and 'Dynamic' modes adapt the F-PACE's steering, transmission, throttle and (when specified) Adaptive Dynamics settings.

The visual changes here are subtle but effective. There's now a more sculpted bonnet with a wider power bulge and more precisely defined surfaces. It flows down into a larger grille with 'diamond' detailing, while the side fender vents now feature the iconic 'Leaper' emblem. The front bumper's been re-designed and there are new super-slim LED quad headlights with 'Double J' Daytime Running Light signatures. At the rear, re-designed slimline lights feature Jaguar's 'double chicane' graphic. And the bumper and tailgate now have a more sculpted look. It's a bit different inside too. There's a sportier-looking centre console that sweeps up to the instrument panel which features a new 'Pivi Pro' 11.4-inch curved-glass HD touchscreen in an elegant magnesium alloy casing. The Drive Selector for the auto gearbox has been re-styled too and the door casings now have more of a premium feel with a smart 360-degree grab handle. The seats have also been re-designed and feature wider cushions. Otherwise, things are as before. You may sit higher than any other Jaguar but it still feels more sports car than SUV and there's no seven-seat option. There's comfortable space for a couple of adults in the rear. And you get a decently-sized 650-litre boot, extendable to 1,740-litres via a 40:20:40-folding rear bench.

This improved F-PACE possesses a set of economy and emissions figures that many a smaller, slower vehicle would be proud of. Let's get to the WLTP-rated figures. The MHEV 2.0-litre four cylinder mild hybrid diesel unit in the base D165 model manages up to 45.4mpg and CO2 emissions of up to 163g/km. As for the six cylinder models, the D300 variant's 300PS 3.0-litre unit returns up to 38.1mpg and 194g/km. All the diesel variants now use advanced MHEV technology (also featured on the six-cylinder petrol powertrain) which features a Belt integrated Starter Generator (BiSG) to harvest energy usually lost when slowing and braking. This energy is then stored in a separate 48V lithium-ion battery before being intelligently redeployed to assist the engine when accelerating away, as well as delivering a more refined stop/start system. What if you'd rather fuel from the green pump? Well, the conventional P250 petrol model's 2.0-litre 250PS petrol unit manages combined cycle fuel economy of up to 30.4mpg, with CO2 emissions of up to 209g/km. If you can stretch to the top P400e PHEV Plug-in Hybrid variant, you can get some really eye-catching figures - up to 130.2mpg and up to 49g/km of CO2. Fast Charging (32kW DC) is capable of delivering 0-80 per cent charge in 30 minutes while a domestic 7kW wall box can provide a charge of 0-80 per cent in as little as one hour 40 minutes.

The F-PACE has been well received - and with good reason. Look at it, drive it and analyse it and you feel you've a product born out of generations of development. It's hard to believe this was Jaguar's first stab at the SUV segment. The brand's decision to stay true to its principles has helped enormously here. This could have been a re-badged Range Rover, or simply a clone of the rival German models already well established in this market. Instead, the F-PACE has its own identity. All of which leaves this Jaguar as a very tough act to fault, especially in this improved form. It's still one of the stand-out contenders in this corner of the SUV market, no small achievement when you look at the quality of the competition. True, it might not be as rough road-ready as a Land Rover product. Or as track-tailored as a Porsche Macan. Most buyers in this segment though, don't want a mid-sized luxury SUV at either of those two extremes. They want a car like this. A sporting SUV to savour.