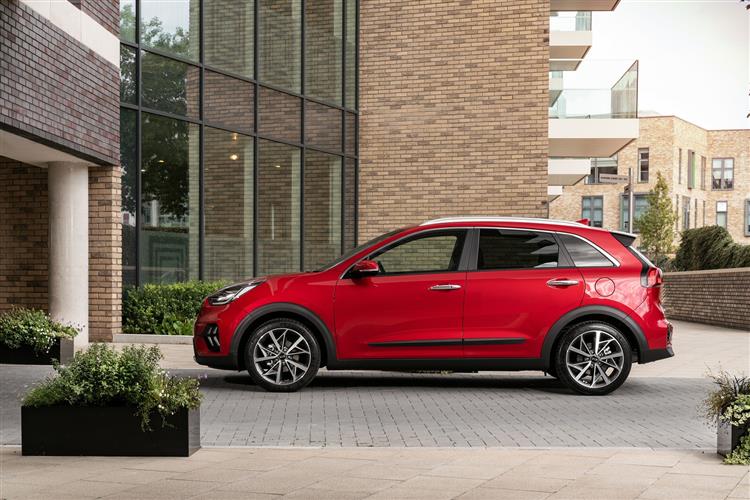 Kia reckons that this Niro model offers the best of both worlds, combining fashionable 'Crossover' looks with exemplary hybrid efficiency. It's not, perhaps, the kind of car you'd expect from this growing Korean brand but in its own way, it promises to be a very appealing one. There's a choice of hybrid, PHEV plug-in hybrid or full-electric e-Niro models. Here, our focus is on the upgraded hybrid variants.

The Niro was Kia's first ever dedicated hybrid model and in recent years, the company has been no stranger to automotive electrification. Hybrid versions of the marque's larger Optima have been on sale in the USA since 2011 - and a Plug-in version of that car is available here. Plus Kia has been marketing a completely battery-powered version of its even smaller Soul Crossover model since 2014. The Niro though, saw the Korean maker's futuristic engineering showcased to a much wider audience when it was introduced in 2017, first in self-charging hybrid form, then as a plug-in PHEV and finally, in 2018, as the full-electric e-Niro BEV. Having established the Niro range, Kia has now moved to improve it, hence the upgraded range we're looking at here. The hybrid versions we're focusing on have certainly been cleverly developed. Instead the old-fashioned nickel metal hydride batteries and belt-driven CVT auto gearbox you get in, say, a more expensive Toyota Prius, here there's properly modern lithium-ion battery technology and a smoother, more sophisticated dual-clutch auto transmission to work with the hybrid system. Plus there's good looks, decent interior space and up-to-the-minute media connectivity in a car neatly positioned in size between Kia's two biggest sellers, the cee'd family hatch and the Sportage family Crossover.

The hybrid Niro is available in either conventional Hybrid or Plug-in PHEV guises. Either way, the hybrid technology is mated to a 105PS 1.6-litre petrol powerplant. In the conventional self-charging hybrid variant, this is mated to a 32kW electric motor. In the PHEV model, it's mated to a more powerful 44.5kW motor. In both cases, the total system output - 141PS - is pretty much the same either way, the petrol engine and the electric motor combining effectively to provide 265Nm of torque, enough for sprightly acceleration away from standstill. As you'd expect from a hybrid, regenerative braking is used to send power back to the battery, but Kia says it's paid special attention to brake feel, reducing the grabby nature that you get from the brakes in other hybrids. The transmission is the latest version of Kia's 6DCT CVT auto 'box, re-engineered specifically for use with the Niro's advanced hybrid powertrain, delivering a more direct and immediate response - and a more entertaining drive - than a traditional continuously-variable transmission would. The Niro's 6DCT is able to shift gears automatically, while keener drivers can pull the gear lever towards them to put the car into Manual Sports mode and allow manual shifting. A series of measures have been adopted to ensure low levels of noise, vibration and harshness. These include specially-designed asymmetric engine mounts to manage powertrain movements at each point in the front subframe, high density under-bonnet insulation and a sound-deadening acoustic shield with a special support structure to improve the sound of the engine accelerating across the most used range of engine speeds.

The Niro occupies a useful space within the brand's model line-up in terms of its size. It's 4,355mm in length, 1,800mm wide and 1,535mm tall, making it smaller overall than the brand's larger Sportage Crossover, though occupying a larger footprint than the cee'd hatchback or the Stonic small SUV. There's nothing particularly exciting about the shape but it's likely to chime with buyers at the larger end of the compact Crossover segment and has a relatively sleek 0.29Cd drag factor. Changes to this revised model include smarter bumpers and a redesign for the front and rear lights. Inside, there's now a higher quality cabin, with greater use of soft-touch materials and an upgraded 10.25-inch widescreen centre-dash infotainment screen provided you avoid base trim. Top-spec models get a TFT screen for the instrument cluster too. The centre screen uses Kia's new UVO CONNECT telematics system. UVO CONNECT features a new Kia Live system, which uses its own SIM card to retrieve and update live data. This gives owners access to live traffic information, weather forecasts, points of interest, fuel prices, and details of potential on and off-street parking - including price, location and availability. The second element of the UVO system is the UVO App, designed for compatibility on Android and Apple smartphones. The app offers users peace of mind with a range of features to provide diagnostic data about their car and the trips they take. As for practical stuff, well there's reasonable rear seat space and decent boot capacity too - 421-litres.

For buyers of the conventional hybrid Niro model, there are three trim grades currently on offer - '2', '3' and '4'. Pricing starts from around £25,000. You'll need a budget closer to £32,000 for the PHEV version which comes only with '3'-spec trim. All Niro models are comprehensively equipped with comfort, luxury, connectivity and driver assistance features. And this upgraded Niro range sees the introduction of a series of extra active driver-assistive safety technologies. Already available with Adaptive Smart Cruise Control, the upgraded Niro Hybrid and Plug-in Hybrid are now offered with additional Stop & Go functionality. Adaptive Smart Cruise Control with Stop & Go follows the preceding vehicle and can now bring the Niro to a stop if traffic slows to a halt, bringing the car back up to speed as the car in front moves off. Lane Following Assist is available for the first time on Niro Hybrid and Plug-in Hybrid models, following its introduction on the electric e-Niro. This technology tracks vehicles in front of the car in traffic and detects road markings to keep the Niro in its lane on the motorway. The system controls acceleration, braking and steering depending on the convoy of vehicles in front, using external sensors to maintain a safe distance, while also assisting the driver change lanes. Lane Following Assist operates between zero and 81mph. The Niro continues to be offered with a comprehensive suite of active safety technologies. Depending on specification, these include Forward Collision-avoidance Assist, Lane Keeping Assist, Driver Attention Warning, High Beam Assist, Blind-spot Collision Warning, Rear Cross-traffic Collision Warning and Intelligent Speed Limit Warning.

So, how do the figures stack up? Well, let's look at the conventional hybrid model most will choose. This car's headline efficiency figures can't match those of Toyota's Prius but they're still pretty impressive: 58.9mpg on the WLTP combined cycle and 99g/km of NEDC-rated CO2. That's achieved using some impressive tech. The Niro uses the Lithium-Ion Polymer battery that is both compact and powerful - so much so that Kia has been able to do away with a 12v battery in the car. Kia has also developed a Predictive Energy Control system to use navigation data that predicts changes to the road ahead and maximises the efficiency of the hybrid system. The 1.56 kWh lithium-ion polymer battery pack is the lightest and most efficient pack used by Kia to date, with up to 50% higher energy density and 13% greater energy efficiency than the battery packs found in key rivals. Weighing just 33 kg, the Niro's battery pack - with an advanced power relay - allows the battery to regenerate electrical energy under deceleration. We ought to cover the alternative Plug-in Hybrid Niro variant too. This derivative puts out just 31g/km of WLTP-rated CO2 and is supposed to be able to return an NEDC combined cycle reading of 201.8mpg - those figures based on calculations assuming that owners will be making full use of the 30-mile driving range potential provided by this variant's 8.9 kWh battery. Charging a Niro Plug-in Hybrid takes 2hours 15mins using a 3.3 kW AC charger.

If you started out wanting to buy a small 'Juke'-style Crossover, you probably weren't expecting to be considering a Hybrid. And, if you started out wanting to buy a Hybrid, you probably weren't expecting to be considering a small Crossover. Get over it. In this Niro, Kia has a car that does a pretty good job in combining fashion and frugality and if you're shopping in either of these segments, it's well worth your consideration. Inevitably, as with any blended concoption, there's an element of compromise here. Some other Hybrids are more frugal, just as some other small Crossovers are more fashion-conscious. Take the view that life is about effectively managing compromise though and you're probably the sort of person who'd really appreciate what Kia has tried to do here. This Niro is, after all, comfortable, spacious and well equipped. It looks good and overall, will almost certainly work out cheaper to run than a comparable diesel alternative. That doesn't necessarily mean it'll be right for you, but there's no doubt of one thing: in terms of the kind of wishlist that a buyer in this part of the market might have, the Niro ticks a lot of boxes.