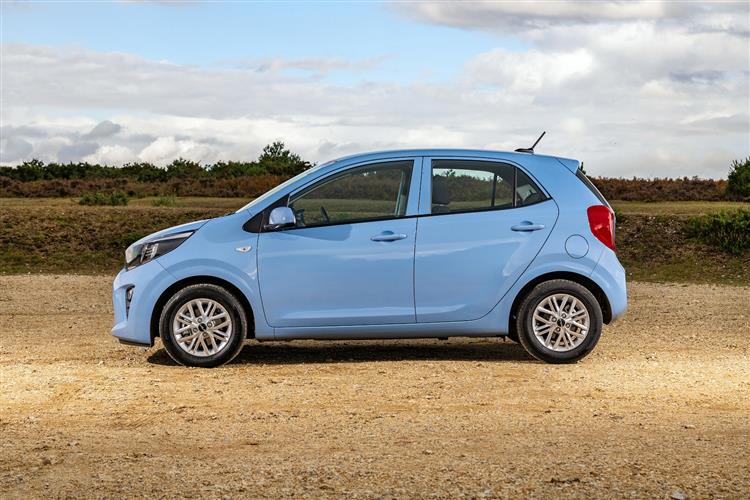 In third generation form, Kia's Picanto is a little citycar that's big in importance for its Korean maker. This improved version is stylish, frugal and practical, it may just redefine the way many people think about this smallest category of car.

Here's how we used to understand small car categorisation and the difference between Fiesta-sized superminis and their smaller, cheaper citycar counterparts. You paid extra for a supermini because it was slightly bigger, because it was better finished and more stylish and because it had more refined engines that made possible longer journeys. So where does that kind of thinking leave us with a product like this, the improved version of the third generation Kia Picanto? It competes with the kinds of models we'd see as citycars, yet like many of them now, it boasts the kind of interior space a supposedly bigger Fiesta or a Corsa had until quite recently. It's very nicely built and acceptably stylish. And yes, it's quite at home attempting longer journeys. Here is the citycar, all grown-up. Where that leaves today's supermini sector is something we don't have to worry about here. Suffice it to say that most of what you'd pay up to £18,000 or more for in that class of car is delivered by this Kia. Other urban runabouts that have previously advanced that argument have either been expensive and/or three-door only, like say a Fiat 500, or have felt too cheap and noisy to really justify themselves as only-car transport, like a Suzuki Ignis or, I suppose, a Hyundai i10. I mention the Hyundai because that essentially is what this Picanto is underneath. Kia has used the underpinnings from this best-selling design, then refined them, improved the build quality and added a sharp new suit of clothes on top. On paper, a pretty effective route to creating a class-leading contender. Let's see if it's worked.

Kia hasn't added its latest mild hybrid tech into the Picanto's engine range, but it has introduced its latest 'Smartstream' technology to improve efficiency. There's now a choice of two 1.0-litre three cylinder units (the previous 1.25-litre 83bhp powerplant having been deleted). Nearly all Picantos will be ordered with a normally aspirated 66bhp engine. At the top of the range, you can also order the brand's 1.0-litre T-GDI (turbocharged gasoline direct injection) 99bhp powerplant borrowed from the larger Rio supermini. Both engines are paired with a five-speed manual transmission, delivering power to the front wheels. As an option with the 66bhp unit, Kia is offering a new Automated Manual Transmission (AMT) gearbox. The AMT set-up is based around a five-speed manual transmission with clutch and gear shift actuators to automate clutch operation and gear shifts. Basically, there's the ease-of-use of an automatic transmission, without sacrificing the fuel efficiency of a conventional manual gearbox. On the move, pretty much everything is as before. Refinement continues to be well controlled for a citycar - indeed Kia says the Picanto offers the quietest cabin of any A-segment model, both at idle and at a steady cruise. The handling's stable too, though obviously, this isn't the kind of car you'd choose for dynamic enjoyment. The Picanto's dinky dimensions also enable the pitch centre of the car to be placed further towards the rear, helping to naturally reduce 'nose dive' under braking without firming up the suspension and potentially compromising ride comfort.

This third generation Picanto hasn't been visually changed too much. In fact, it hasn't been changed at all in terms of base-spec variants. The 'GT-Line' and 'X-Line' versions though, do get a few tweaks, with revisions to the 'tiger-nose' front grille, which gets red highlights with 'GT-Line' models and black trim with the 'X-Line' variants. There are also redesigned headlights with LED daytime running lights and LED tail lamps. And revised bumpers, plus a wider lower air intake. As usual, all Picantos have a 5-door body shape with Kia's wide C-pillar as a design motif. Inside, the main large lies with the addition of a larger 8-inch 'floating' widescreen audio visual navigation display for plusher models. There's also a further 4.2-inch display in the instrument binnacle between the dials. Kia designers have created a more modern, refined cabin with this third generation model, with classier materials and a smarter layout. Depending on trim level and market, the Picanto's interior is offered with black cloth or synthetic leather seats, with the upgraded model finished with a range of fresh upholstery textures for a more contemporary, higher quality look and feel. The cabin is finished with black, silver or gloss black highlights in the door, on the dashboard and around the gear selector. A range of trendy interior colour packs can customise the cabin too. At the back, buyers get a choice of a bench offering either four or five seats. And behind that, there's a 255-litre boot that's almost class-leadingly big for a citycar.

Pricing to be pretty similar to what went before, which means a Picanto range priced in the £10,750 to £16,000 bracket. There are seven mainstream trim levels - '1', '2', '3', 'X-Line', 'X-Line S', 'GT-Line' and 'GT-Line S'. The 'X-Line' variant has SUV styling cues. If within that range, you can stretch to a plusher model, you'll get yourself a citycar fitted out with some of the most advanced infotainment and convenience technologies available in the A-segment. Primarily, we're referring to the large, 'floating' 8.0-inch touchscreen at the centre of the dashboard which houses a navigation system with 3D mapping and is available with Apple CarPlay and Android Auto for full smartphone integration. This features Kia's latest UVO Connect Telematics system, giving Picanto drivers access to live traffic information, weather forecasts, points of interest, fuel prices, and details of potential on and off-street parking. A rear-view parking camera with dynamic guidelines is also on offer to buyers who want an additional level of assurance when completing parking manoeuvres. An optional wireless smartphone charger and USB port, located at the base of the centre console, ensures that drivers can keep mobile devices charged on the move. A range of trendy interior colour packs are also available. As for safety, well Kia says that this is the safest A-segment car it has ever made. Depending on specification, the Picanto's latest 'ADAS' camera safety portfolio includes Forward Collision-Avoidance Assist (FCA) with vehicle and pedestrian detection. Additionally, the Picanto is available with Blind-Spot Collision-Avoidance Assist (BCA), Lane Keeping Assist (LKA), Driver Attention Warning (DAW), and Lane Following Assist (LFA). LFA uses the front-facing camera and sensors to monitor road markings, controlling the Picanto's steering to keep the car in the centre of its lane. The Picanto also features Rear Cross-Traffic Collision-Avoidance Assist (RCCA), which alerts the driver and stops the vehicle if it detects another vehicle approaching from the left or the right when reversing out of a parking space.

No car in this class has a sniff of a chance unless it can guarantee tiny day to day running costs and the Picanto tries hard to answer that particular call, aided by this revised model's latest 'Smartstream' engine technology. The 1.0-litre T-GDi engine now features a more efficient 350 bar high-pressure fuel injection system. Meanwhile, the naturally-aspirated engine replaces multi-point injection with new dual-port fuel injection technology, with optimised injection timing for maximum fuel efficiency. Both units feature improved exhaust gas recirculation lines, and optimised intake valve timing, for maximum fuel efficiency improvements. And both engines are equipped with a new Integrated Thermal Management System (ITMS), which provides more effective combustion chamber cooling. ITMS varies engine cooling characteristics based on the engine's operating point. If you go for the 1.0-litre 66bhp engine, the WLTP figures are 58.9mpg (combined) and 110g/km. With the 1.0 T-GDI turbo variant, 50.4mpg and 128g/km is quoted. Couple the titchy fuel bills with free road tax and cheap insurance and you have a car that makes all kinds of sense for city drivers. It's exactly because it stacks up so well on the balance sheet that residual values look set to be very healthy. The much-trumpeted 7 year / 100,000 warranty helps in that regard since it's transferrable to future owners. However, it is worth pointing out that the 'bumper to bumper' complete car warranty is only five years, with the extra two years of cover being restricted to the engine and gearbox. If the car is sold through a Kia Used Approved Dealership when less than 18 months old or with less than 18,000 miles on the clock, the warranty will be topped up to match that of a new model.

It's not uncommon to assess a vehicle and wonder why it has been launched. Some manufacturers get their product design cycles out of phase with economic conditions, while others launch into a once fashionable market that's gone cold. Then there are those that arrive plum square with the right product at the right time and the Picanto is most definitely one of the latter. It doesn't do anything that's particularly fresh or radical but its blend of affordability coupled with solid engineering, impressive build quality, generous equipment and clean styling build upon its tiny ongoing running costs to form a convincing buying proposition. Back that up with a great warranty and this improved Kia Picanto emerges as one of the very best citycars we've seen in quite some time.