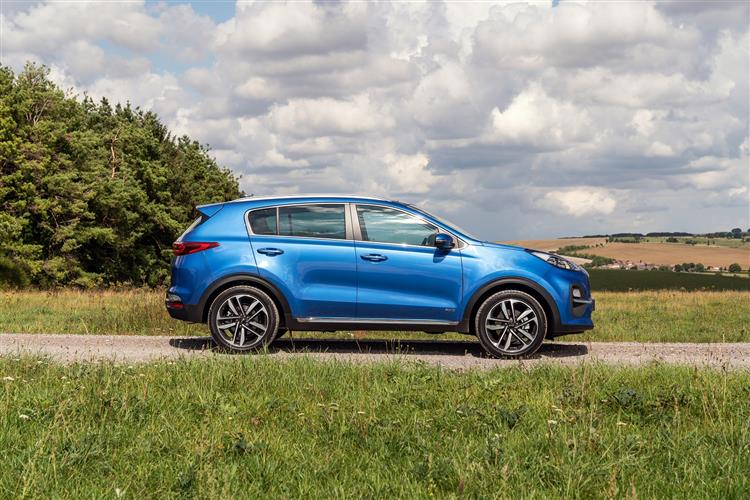 This improved version of the fourth generation Kia Sportage is an affordable mid-sized SUV that delivers even more of what buyers are looking for in this segment. Jonathan Crouch checks it out.

It might be easy to believe that the market for compact and mid-sized SUVs hasn't essentially changed all that much in the last ten years, but it's now radically different and the biggest beneficiary of these changes has been Kia, and more specifically its Sportage. Consider this. Just over ten years ago, you could pick up a brand new entry level Land Rover Freelander for under £16,000. Even as I'm typing this, I'm double checking to see if that's correct. It is. Nowadays the Freelander's Discovery Sport replacement would probably set you back well over £35,000. That's a massive increase. Yet the Office of National Statistics tells us that the average annual wage over the same period rose by 37%. What it all means is that a huge amount of buyers are being priced out of the SUV market. That's something that Kia not only recognised, but also put itself in prime position to capitalise on with its impressive fourth generation Sportage. This revised version of that car gets mild hybrid engine tech and a range of technologies to improve comfort, convenience, connectivity and safety. If you're buying a mid-sized SUV or a Qashqai-like Crossover model in this segment, it's well worth a look.

On the move, you'll find that as before, this Sportage is among the more firm-riding SUVs in this segment, which keeps body roll in check round the bends but isn't enough to give this car class-leading driving dynamics. But Kia's certainly getting there. With this improved fourth generation model, the key change is the addition of Kia's 48-volt mild hybrid tech for the volume 1.6-litre CRDi 134bhp diesel unit. Opt for the brand's 7-speed 7DCT auto gearbox and you can also have this engine with AWD. The mild hybrid system supplements acceleration with power from a compact 0.44 kWh 48-volt lithium-ion battery, and extends engine 'off time' with a Mild-Hybrid Starter-Generator (MHSG) unit. The MHSG is connected by belt to the engine's crankshaft, and switches seamlessly between 'motor' and 'generator' modes. In 'motor' mode the battery is discharged under acceleration, providing power assistance to the engine, to reduce engine load and emissions. Under deceleration - when braking, or coasting towards a junction or downhill - the MHSG switches to 'generator' mode, recuperating energy from the crankshaft to recharge the battery on-the-go. All well and good, but what if your preference is for petrol power in your Sportage? Those seeking to fuel from the green pump aren't favoured with any kind of electrified tech and as before, the entry-level point to the range remains the (now rather elderly) 1.6-litre GDI 130bhp normally aspirated petrol unit, which only comes with a manual gearbox and front wheel drive. If funds permit, you'd be better stretching to the petrol alternative, a 1.6 T-Gdi turbo 174bhp powerplant which can be had with manual or automatic transmission and front or AWD.

There are no further visual changes to this updated Sportage: there didn't need to be as the range was aesthetically updated as recently as Autumn 2018. Trademark Sportage touches include the windscreen's castellated top edge and the way that the raked-back C-pillar contrasts with the angled rear window. At the rear, top versions get full-LED tail lamps with a special illuminating 'C'-shaped signature. This Kia is a fraction larger than the SUV C-segment class norm. The standard version's 4,485mm-length makes it 91mm longer than a Nissan Qashqai and 122mm longer that a SEAT Ateca. The 'GT-Line' variants are 10mm lengthier still. There is an important change inside though. All versions in the Sportage range now feature the Korean maker's most sophisticated 'frameless' eight-inch touchscreen satellite navigation system, which comes with the brand's latest UVO Connect telematics system, plus as before, there's 'Android Auto'/'Apple CarPlay' and Bluetooth smartphone connectivity. Otherwise, it's as before. The exterior dimensions lead you to expect a decently spacious cabin, which is what you get, with plenty of head and elbow room. And at the back? Well if you've previously owned or test driven a rival comparably-priced Qashqai or Ateca, you should notice how much extra leg room is freed up by that slightly lengthier body; it really is significant and aided by scalloped front seat backs. The rear bench backrest reclines and headroom's reasonable too, despite the sloping roofline. Out back, boot space is rated at 491-litres in petrol models, extendable to 1,480-litres if you fold the rear seat.

Sportage prices are a little higher these days, kicking off at around £23,500 and rising to around £33,500. There's a choice of '2', '3', 'GT-Line' and 'GT-Line S' trim levels. Basically, the 'GT-Line' is a sportier-looking version of a '2'-spec model and a 'GT-Line S' derivative is a sportier-looking version of a '3'-spec derivative. An AWD 4x4 system is either optional or standard on most models, as is Kia's 7-speed 7DCT auto transmission. All models come well equipped. Even the grade '2' variants come with alloy wheels, heated front and outer rear seats, dual automatic air conditioning, privacy glass, an auto-dimming rear-view mirror, rain sensing front wipers, automatic light control, electrically folding, adjustable and heated door mirror, cruise control with speed limiter and Apple CarPlay and Android Auto smartphone connectivity. In addition, there's Trailer Stability Assist (TSA), Hill-Start Assist Control (HAC), Downhill Brake Control (DBC) and cruise control. Plus lots of camera safety kit. This includes a Lane Keep Assist System (LKAS) to alert a tired driver who may be about to stray into the path of a vehicle approaching from behind. Plus High Beam Assist (HBA) to switch between full and dipped beam automatically when there are other vehicles in their vicinity on unlit roads. And a Speed Limit Information Function (SLIF) within the instrument cluster.

Let's look at the WLTP-rated efficiency figures. The big news here is in the extension of 48V mild hybrid technology to the base 1.6 CRDi diesel. That's meant a 2WD manual or auto front driven variant with that engine can return up to 52.3mpg on the combined cycle and a CO2 reading of 131g/km. For the AWD auto version, the figures are 46.3mpg and 159g/km. The mild hybrid technology in use with this unit is certainly clever. The engine is assisted by a compact starter-generator unit belt-connected to the crankshaft. Power for the 48V Ecodynamics+ system comes from a small lithium ion battery mounted beneath the boot floor and the 13bhp electrical boost it facilitates boosts the Sportage's total output under acceleration. When you lift off the throttle to coast, or use the brakes, the starter becomes a generator, recharging the battery with energy that you'd otherwise lose in the form of heat. Kia claims that this technology improves efficiency by up to 4%. With the conventional petrol models, you'll find that the 174bhp 1.6 T-Gdi petrol turbo engine is hardly any dirtier than the 130bhp 1.6 GDI normally aspirated unit (183g/km as opposed to 177g/km). The base 130hp powerplant manages an unremarkable 36.2mpg on the combined cycle. All Sportage variants, like all Kias, get the brand's impressive 7-year warranty.

Have the updates made to this improved fourth generation Kia Sportage been sufficient to keep buyers loyal? It's true that they could have been more far-reaching, but there's just enough here to keep existing customers happy, we think. That's important as Kia is fortunate enough to have quite a few of these people in the UK, thanks to the impressive sales success achieved by earlier generation versions of this car. This enhanced MK4 model offers these folk a little more technology and, as before, they'll like the generous equipment levels and long warranty. Ultimately, it's a car you sit in and wonder just how so many rivals can really be worth around £5,000 more. That says it all really.