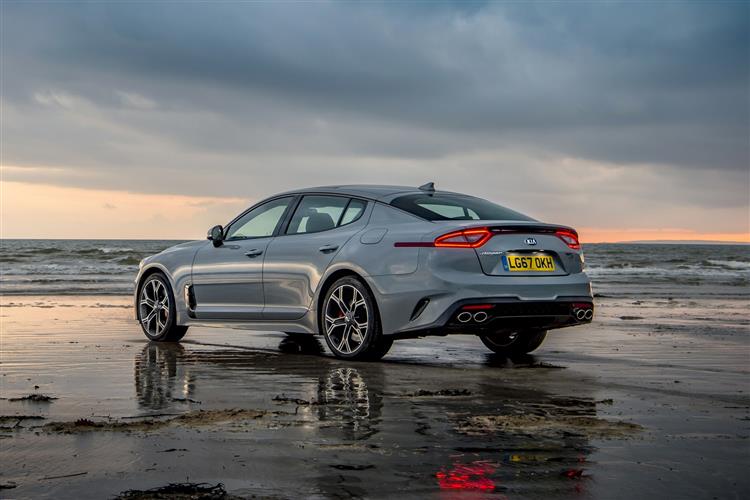 Yes, it's a Kia. Yes, you might want one. No, this 'Gran Turismo' model isn't merely a copy of something German. Welcome to the Kia Stinger GT S. The looks don't lie.

Did you ever imagine that one day, Kia would bring you something like this? The company itself did. What we have here is their so-called 'Gran Turismo', the Stinger, the first of quite a number of more up-market premium models the brand plans to bring you. It's quite something isn't it? The car has a stylised five-door hatch bodyshape closest in concept to sportier versions of mid-sized executive contenders like Audi's A5 Sportback and BMW's 4 Series Gran Coupe. Kia not surprisingly sees both these cars as close rivals, but also thinks that what's on offer here could appeal to people tempted by sleeker premium sports saloons in this segment like Alfa Romeo's Giulia, Volkswagen's Arteon and Jaguar's XE. The Stinger's a fraction larger than models of that sort and, as well as being more arresting to look at, is also better equipped and claims to be more dynamically focused, especially in the top 3.3-litre twin turbo V6 GT S flagship guise we'll be trying here. Time to put this car to the test.

Kia calls the Stinger a 'game-changer'. It's certainly very different from anything we've seen from the brand before. It's the company's very first rear-driven car and the first one truly able to take on premium European bands in terms of drive dynamics. Kia poached Albert Biermann, the former Head of BMW's M Performance division, to perfect these and the work that he and his team have put into this car at the testing Nurburgring Nordschleife racetrack is immediately evident in this Stinger's impressively accomplished blend of high speed stability and crisp directional responsiveness. Adaptive suspension is standard on this top variant and all derivatives get a drive modes system that enables you to alter steering feel, throttle response and changes from the standard 8-speed auto transmission,all to suit the way you want to drive. The resulting package is good enough to be considered alongside anything you could experience in a rival German premium brand model. Three engines are on offer, with the 365bhp 3.3-litre twin turbo V6 you'll find in the T-GDi GT S flagship model we're trying here being the most potent one. From rest, 62mph flashes by in 4.7s en route to 168mph. You'll pay for that at the pumps of course but the Stinger's proper 'Gran Turismo' experience makes up for it. Think of this Kia being a kind of Porsche Panamera for the relatively well-heeled common man and you'll be closest to understanding the objective being targeted here. Like that model, it's a car in which you feel you could cross continents. But also like a Panamera, there's enough dynamic feedback here to keep you aware that much more than that is possible.

German brands need to understand that you don't create a 'Gran Turismo' simply by switching to a five-door bodyshape from an existing saloon and adding a rear spoiler. Designer Gregory Guillaume seems to have appreciated that better than his counterparts at Audi and BMW and, as a result, the Stinger's longer, lower and quite differently proportioned from anything else in the segment. Inside, you sit low on leather stitched figure-hugging sports seats, view a broad faux leather soft-touch-trimmed centre console and grasp a flat-bottomed three-spoke D-shaped wheel over which you can also view a head-up display. The 8-inch centre-dash touchscreen is one of the elements borrowed from cheaper Kia models, but it's been well integrated. There are definite hints of Porsche and Mercedes here - the stubby auto gearlever, the 'jet turbine'-style three chromed central round vents - but this cabin's much more than some kind of derivative Teutonic 'homage'. It has its own sense of style and quality too, with cool metal surfaces, stitched leather trim panels and beautifully damped switchgear. In the rear, what's on offer can't match the palatial standards of a rival Volkswagen Arteon, but it certainly out-classes those competitors from Audi and BMW and if you take a seat in a rival Jaguar XE after trying one of these, you'll feel like you're in a supermini. There's a decent 406-litre cargo area too.

It must have been difficult for Kia to know how to price this car. This flagship 3.3-litre T-GDI V6 petrol GT S variant comes only in a single fully-loaded spec and requires a £41,000 budget for ownership. In terms of its value proposition, well a directly comparable BMW 440i Gran Coupe M Sport will cost you about £4,000 more and is fractionally slower off the mark. Otherwise, you're going to need to think about spending between £7,000 and £8,000 more on cars like Audi's S5 Sportback and the Mercedes-AMG C43 if you're to properly match the proposition on offer here. Predictably, the Stinger GT S is better equipped than these rivals. You get 19-inch alloy wheels with red 'Brembo' brake callipers. And five-way-adjustable electronic adaptive dampers that allow you to fine tune the driving experience to the conditions. Inside in a GT S, softer 'Nappa' leather covers the seats and the driver is treated to adjustable side bolsters for added support. Plus there's a large sunroof, a powered tailgate. In addition, inside at this level in the range, you'll get a '360-degree around-view monitor', cooled ventilated front seats, heated rear upholstery, a wireless smartphone charger and a thumping 15-speaker Harmon/Kardon Premium Sound System with a subwoofer and 'QuantumLogic' Surround sound.

Like other Stinger models, the returns of this top GT S variant are, in very rough terms, around 20% behind those you'd enjoy in a comparably powerful European rival. That's despite the provision of the company's 'Intelligent Stop-Go' engine stop/start system. Specifically, the figures are 28.5mpg and 225g/km. A lot of this is down to the car's hefty 1.8-tonne kerb weight. Before you despair of getting the prospect of Stinger motoring by your company accountant though, bear in mind that much of this shortfall can be countered by this Kia's significantly lower asking price. Even the predicted residuals aren't too bad bearing in mind the restricted levels of brand equity here, industry experts CAP reckoning that after three years and 60,000 miles, your Stinger will still be worth between 36 and 39% of what you originally paid for it. To give you some perspective, that's about the same as you'd get from a top BMW 4 Series Gran Coupe and only a few percentage points off the class leader in this regard, Audi's A5 Sportback. Of course, these are only predictions and with a fashion-conscious product of this kind, the outlook can always be a touch uncertain. Nevertheless, if only on sheer rarity value, this Stinger can be expected to doggedly hold onto its value in a way that no previous Kia model ever has.

It's probably evident by now that we like the Stinger very much. It's certainly not the kind of car you would expect from this ambitious Korean brand, but in many ways it's the sort of model only Kia could have made. The styling's unconstrained by the need to reference other premium designs in the brand's portfolio because (for the time being at least) there aren't any. In the same way, the drive dynamics have been individually judged, giving this car a fluid, rewarding feel that fits perfectly with its 'Gran Turismo' billing. Once you've tried it, you'll feel a hint of compromise in most European rivals. We have a feeling that the sweet spot in the range might lie with the temptingly priced 2.0-litre petrol model rather than this V6 GT S variant, but either way, you'll get yourself an automobile that fundamentally feels like it's been created by people who like cars. A lot. That's a rarity in today's market. And it deserves your attention.