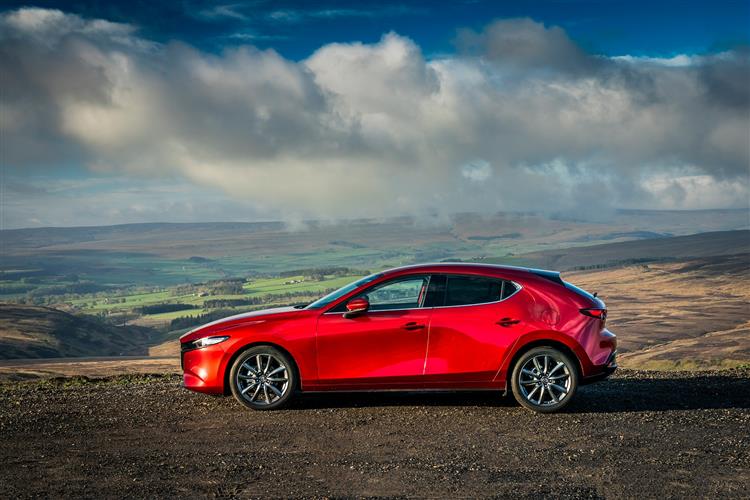 The Mazda3 Saloon is the four-door version of this Japanese brand's engaging family hatch. This notchback body style is one not many manufacturers bother to offer in the family hatch segment these days, but it's welcome here. Read on to find out why.

Here's a car that bucks the trend. It's conventionally shaped when fashion says it should be an SUV. It's got a normally aspirated engine when virtually every other car on the road has a turbo. And it's also that rarest of things, an affordable volume branded compact saloon. Welcome to the Mazda3 Saloon. It was originally called the Mazda3 Fastback, the Japanese brand reckoning that that moniker might make the car more likely to sell. And it needs some help: compact saloons don't traditionally do very well in our market unless they come with premium price tags and a posh badge on the bonnet. But this one might carve out a useful niche for itself - and here, we're going to find out why.

We think the Mazda3 in any form is one of the best handling family hatch sector cars you could choose. We'd take it over a Ford Focus; it's that good. And it has the slickest manual gearbox of any car of this kind you could choose. Automatic transmission is optional, but for goodness sake try the stick shifter before you stump up for a self-shifter. There's only one engine option, a so-called 'Skyactiv-X' powerplant. It's a development of the Skyactiv-G 2.0-litre petrol unit used in base versions of the Mazda3 Hatch but is very different, developing 180PS and using what the brand calls 'Spark Controlled Compressed Ignition' or 'SPCCI', a patented lean burn process that delivers exceptional efficiency. Interestingly, it incorporates a supercharger, not for extra performance (though torque is increased by up to 30% over the Skyactiv-G unit) but instead to ensure that there's enough air in the engine for the compression ignition to work properly. Rest to 62mph takes 8.2s en route to 134mph. Unlike in the Mazda3 Hatch, you can't choose to have this powerplant mated with the brand's i-Activ AWD all-wheel-drive system.

So: reasons to buy the Saloon version of the Mazda3 over the Hatch. Let's start with the fact that you get more boot space - quite a lot more actually; 419-litres, 55-litres more than the 5-door version. It's a little harder to just drop your bags into this notchback model's trunk though. And predictably, you have to do without a wiper on the rear screen. The other reason you might buck the Mazda3 buying trend and choose this Saloon over the Hatch is that you might think this four-door looks a touch more elegant than its showroom stablemate. The reason volume branded compact four-door models just don't sell here is that they often look boring (Fiat's Tipo Saloon anyone?) But this Mazda doesn't. In fact it has quite a strong visual identity. Get a nicely specified one - ideally painted in the brand's trademark 'Soul Red' metallic - and a far pricier Audi A3 Saloon looks rather dull and bland by comparison. There's a fraction less of a sloping headline in the Saloon then there is in the Mazda3 Hatch, so it'll be better for the carriage of taller adults. Of course, the front part of the cabin is no different. There are smart materials crafted with interesting design and button clutter has been well and truly banished. Plus there's a big, clear 8.8-inch display on top of the dash nicely angled towards the driver. And there's a lower rotary controller for it so you don't have to stab away at inexact touchscreen functionality in the kind of way that's necessary with many rival set-ups.

Prices are identical to those of the Skyactiv-X version of the Mazda3 Hatchback, which means that the Saloon range kicks off at around £23,500 and tops out at around £30,000. Within that six grand window are no fewer than five different spec combinations. The trim levels open with 'SE-L', step up through 'SE-L Lux', 'Sport Lux', 'GT Sport' and 'GT Sport Tech'. Avoid the two base trim levels and you'll be offered the £1,540 option of auto transmission. Standard kit across the range includes high-end technology such as a windscreen projecting colour head-up display with Traffic Sign Recognition, Mazda Radar Cruise Control and LED headlights across the range. Every model in the line-up also features navigation, Apple CarPlay/Android Auto and an advanced eight speaker audio system. 'Sport Lux' models feature a reversing camera, smart keyless entry and heated front seats. 'GT Sport' sees the introduction of black leather seats with power adjustment, a heated steering wheel and Bose audio, while the range-topping 'GT Sport Tech' features a suite of additional active safety equipment, including a 360-degree camera and Driver Monitoring System with interior camera.

Mazda has taken a refreshingly honest approach to fuel efficiency here. Rather than offer downsized engines which do really well on the rolling roads of the EU's computerised fuel economy tests, it has instead offered this Mazda3 with larger capacity 2.0-litre powerplant which, it claims, work a whole lot better in typical real world driving conditions. The Saloon is slightly more aerodynamic than the hatchback and comes only with the engine we'd most recommend in this car, the 180PS Skyactiv-X unit. This unit is based on the 2.0-litre normally aspirated mild hybrid Skyactiv-G powertrain found in cheaper versions of the Mazda3 Hatch. But it can run far leaner than any ordinary petrol powerplant ever could, improving efficiency by up to 30% over the Skyactiv-G, helped by a supercharger which ensures that there's enough air for the clever 'Spark Controlled Compression Ignition' system to function. The result is a set of WLTP fuel and CO2 readings that should better those of many conventional diesel models in this segment. Think up to 52.3mpg and 122g/km. From a powerful 180PS engine; have cake - eat it. It's as simple as that. This comes courtesy of a ground-breaking 'SPCCI' 'Spark Controlled Compression Ignition' system.

The Mazda3 Saloon will be a rare sight on British roads, but the few folk who choose this body style will, we think, feel rather satisfied. There are lots of things we like about the Mazda3 Hatch - the great driving dynamics, the quality cabin with its premium infotainment system, the sharky front end and the efficient, yet responsive SKYACTIV-X engine. All of these, of course, also feature with this Saloon body style which - to some extent - corrects one of the few things we didn't like about Mazda3 Hatch - it's rather pokey rear cabin. Still, to choose one of these, you're going to have to be prepared to buck a few fashionable trends. Something tells us though, that a typical Mazda3 Saloon customer won't be too worried about doing that.