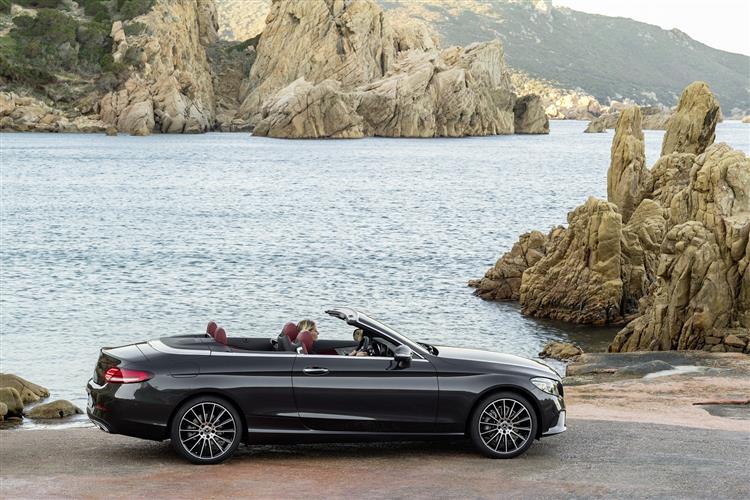 There wasn't much wrong with the Mercedes C-Class Cabriolet that a few more sophisticated entry-level engines wouldn't have put right. Now that this smartly-styled convertible has these mainstream powerplants in place, it's properly set to really trouble mid-sized drop-top segment favourites like the Audi A5 Cabrio and the BMW 4 Series Convertible. You'd like one.

Think of a Mercedes cabriolet and you tend to think in terms of needing a lottery win. You'll be picturing cars like the SL roadster or maybe the smaller SLC. If luxury is more your thing, then perhaps the models you have in mind are Cabriolet versions of the brand's E-Class and S-Class models. All are expensive. Slightly more accessible though, is the car we look at here, the C-Class Cabriolet. It's based on the C-Class Coupe and gets significant upgrades in the revised guise were going to examine here.

On the road, this C-Class Cabriolet comes with a multi-layered fabric roof that can activate in less than 20s at speeds of up to around 30mph. Once the hood is unclipped and on its way backwards, what Mercedes calls an 'AIRCAP' draught stop system springs up on the windscreen header rail. At the same time, a wind deflector can glide up behind the rear seats and together, these two elements are very effective in limiting cabin buffeting at speed. That roof mechanism leaves this model is 125kgs heavier than the C-Class Coupe model it's based upon, extra bulk you really feel when you're pushing on around twisting secondary roads. On the plus side though, this Cabriolet is stable and very well balanced, aided by a standard 'DYNAMIC SELECT' driving modes system that not only tweaks the throttle and steering but also alters responses from the standard 'AGILITY CONTROL' adaptive suspension. Uniquely in this class, there's the option of upgrading the damping into a hi-tech air-suspended 'AIRMATIC' set-up. On top of that, mainstream variants get a 9G-TRONIC 9-speed automatic gearbox that's more sophisticated than anything the opposition can offer. With this revised model, the most important news is the introduction of fresh mainstream petrol and diesel engines beneath the bonnet. The range kicks off with the 156hp 1.6-litre petrol engine used in the base C180, but ideally, you'd begin your perusal of the line-up with a more modern unit, the 1.5-litre 184hp petrol unit fitted to the base C200, a model available in rear-driven or 4MATIC form. This powerplant features clever 'EQ Boost' technology which uses a 48volt on-board network with a belt-driven starter/alternator. There's also a 258hp 2.0-litre petrol variant, the C300. Many C-Class Cabriolet customers still want a diesel, usually the 2.0-litre 194hp powerplant fitted to the C220d variant, which can be had in rear-driven or 4MATIC form. There's also a C300d variant with the same engine tuned out to 245hp. At the top of the range lie the fearsome Mercedes-AMG models, offered with V6 or V8 power. The V6-engined C 43 4MATIC now puts out 390hp, 23hp more than before. That's enough to take a C 43 Coupe from rest to 62mph in just 4.7s. Beyond that lies only the V8 C63 S AMG model, with a 4.0-litre V8 Biturbo engine offering 510hp.

With its top up, the profile of this two-door cabriolet resembles that of the C-Class Coupe, with virtually identical basic dimensions. The styling of this revised model isn't much different, a revised front bumper slotting under the smart diamond radiator grille which is flanked by standard-fit LED High Performance headlights. As before, a high beltline and frameless doors with free-standing exterior mirrors aim to underscore the sporty character. The fully automatic fabric soft top can be opened and closed using a matt chrome curved switch on the centre console. After opening, it folds down quietly and is stored in the soft-top compartment in the boot. Inside, the cabin now gets the option of the fully-digital instrument display, a 12.3-inch TFT screen that replaces the conventional dials using technology borrowed from larger Mercedes models. You can customise the layout between three display styles - 'Classic', 'Sport' and 'Progressive'. As before, flowing forms characterise the centre console as well as the door and rear side panelling, which smoothly merge into one another to emphasise the coupe character. The front sports seats feature automatic belt feeders for added convenience. The choice of materials and the finish have a hand-crafted feel with high-class appeal and aim to deliver a fresh take on modern luxury. The 50:50 split rear seats can be completely folded down. This extends boot capacity which is 360-litres - or 285-litres with the roof open.

Think in terms of needing around at least around £40,000 for your C-Class Cabriolet, once you've allowed for a few well-chosen extras. That's just a starting point of course. Most models will be sold in the £45,000 to £50,000 bracket. Below the top 'Mercedes-AMG' models, there is just one main trim level - 'AMG Line' - and it's very well equipped. We particularly like the sensitive climate control system that adapts itself whether the car is being driven with the roof up or the roof down. A key option you really have to have on this car is the 'Cabriolet Comfort package'. This gives you two key features; the electric AIRCAP draught stop system that reduces the interior turbulence for rear passengers at the press of a button. And the AIRSCARF neck-level heating set-up for the driver and front passenger. Alternatively, there's also the option of a retrofitted manual folding draught stop behind the front seats. This noticeably stops draughts in the front seats. This revised model features the option of Mercedes' latest 'level 2' autonomous driving technology, with improved camera and radar systems that allow it to see up to 500m ahead. You'll need the optional 'Driving Assistance Package' for that, which features the brand's 'Active Distance Control DISTRONIC' active cruise control system which can draw on navigational data to predictively adjust your speed.

The new 1.5-litre EQ Boost petrol engine fitted to the C200 enables a useful improvement in efficiency to be possible, so don't automatically opt for a diesel this time round. It manages 147g/km of CO2 (WLTP) and up to 38.2mpg on the WLTP combined cycle. This unit features a clever starter/alternator that during deceleration recuperates kinetic energy and charges the battery. For auto models, there's also a gliding mode that operates at cruising speeds, switching the engine off, before seamlessly re-starting it when you brush your foot against the throttle. And a 'recuperative brake with intelligent engine stop' function which also works when the vehicle is coasting. Mercedes says that internal friction is much reduced with this new four cylinder unit. As for the 2.0-litre diesel engine fitted to the C220d, well it performs to the latest super-stringent Euro 6d-TEMP standard and uses a particularly efficient 'step recess' combustion process - named after the shape of the combustion case in the piston. Internal friction is also reduced here - by around 25% - and the engine's more compact, leading to significant efficiency benefits. It manages 127g/km of CO2 (WLTP) and up to 51.4mpg on the WLTP combined cycle. What else? Well maintenance costs will be kept down thanks to an ASSYST Plus service indicator on the dash that'll calculates precisely when a dealer visit might be needed. And residual values will be as high if not higher than anything else in the class.

I said at the beginning that you might not necessarily need a lottery win to own one of these but the important thing is that at the wheel - or on your driveway - this C-Class Cabriolet will make you feel as if your numbers have come up. Use it day-in and day-out and we think you'd start to wonder whether it would be really worth paying twice as much for a more exalted Mercedes drop-top, even if you had the funds to do so. Yes, you could get yourself an Audi A5 Cabriolet or a BMW 4 Series Convertible for a little less than you'd pay for one of these, but neither of those cars have quite the street cred that attaches itself to this C-Class. This is, in short, a very complete product.