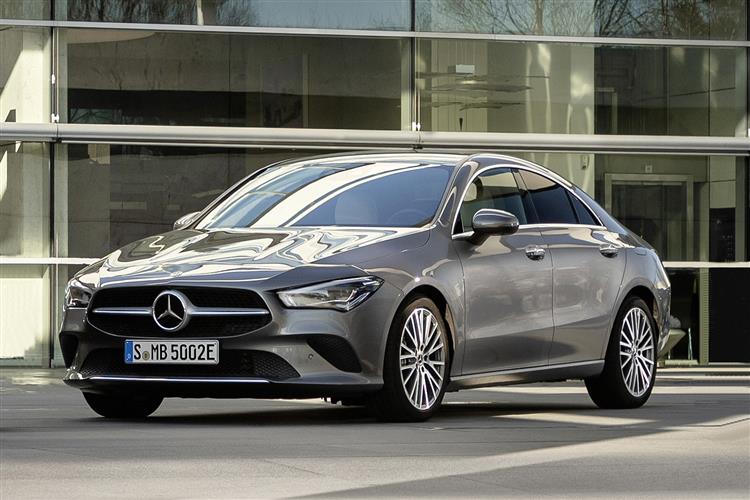 Mercedes thinks that the tech-savvy customers looking at its CLA four-door Coupe and Shooting Brake models will be attracted by the plug-in hybrid technology that features in this clever CLA 250e variant. It can travel up to 42 WLTP-rated miles on a single charge that can be completed from 10-100% in just an hour and 45 minutes from a 7.4kW garage wallbox. And the 1.33-litre petrol engine and 75kW electric motor produce a sprightly 218hp total output, yet a super-low CO2 reading of up to 31g/km. In short, this is a car that's eco-conscious as well as fashion-conscious.

If you're looking at a trendy premium-badged compact saloon or estate, then you're probably also the kind of person who likes the ideas of futuristic electrification. Which is why the three key premium brand models competing in this segment, the Mercedes CLA, the BMW 2 Series Gran Coupe and the Audi A3 Saloon, have all been developed with it. It's the Mercedes we look at here, a car which, unlike its two arch-rivals, is additionally offered in an estate form, the 'Shooting Brake'. As well as its various conventional engines, the CLA is also available with clever PHEV tech in the form of the variant we look at here, the CLA 250e. The CLA 250e shares the same plug-in powertrain as the A-Class, the B-Class and the GLA crossover, a set-up that right now just happens to set the segment standard. But can it justify a significant price premium over the conventional petrol and diesel versions of this CLA? Let's take a look.

Not long ago, before the advent of plug-in technology, the idea of a humble 1,332cc petrol engine somehow putting out as much as 218hp would have been quite startling but that's the system output of the CLA 250e. That figure combines the 150hp of this model's 1.33-litre powerplant with a 75kW electric motor linked to a 15.6kWh lithium-ion battery. These power sources collectively generate a pretty potent system pulling power figure of 450Nm. So, not surprisingly, performance is sprightly, 62mph dispatched in just 6.8s en route to 149mph. You have to have front wheel drive and an 8-speed 8G-DCT dual clutch auto transmission. Of most interest to a potential PHEV buyer though, will be this model's projected WLTP all-electric driving range - up to 42 miles. Obviously, you won't get anywhere near that figure if you regularly approach the quoted all-electric top speed of 87mph. An 'Electric' drive programme keeps the car in battery drive unless the accelerator pedal's kickdown function is used. In the 'Electric' programme, the energy recovery level can also be selected via paddles behind the steering wheel. The paddles on the steering wheel enable the selection of five different recuperation levels ('DAUTO', 'D+', 'D', 'D-' and 'D--'). The usual additional 'Comfort', 'ECO' and 'Sport' modes are also available. According to the given requirements, the driver is thus able to give priority to electric driving, place the emphasis on driving dynamics or give preference to combustion mode in order to save electric range, for example.

This CLA's PHEV set-up is all very cleverly packaged. An innovative exhaust system layout explains the need for a relatively minimal reduction in boot capacity compared with a conventionally-engined CLA four-door Coupe or Shooting Brake estate model. The exhaust ends in a centrally positioned outlet under the vehicle floor, with the rear silencer housed in the transmission tunnel. Integrating the fuel tank into the axle installation space creates additional room beneath the rear seats for the high-voltage battery. Otherwise, it's much as it would be in any other CLA. Visual differentiators as to this variant's plug-in status are limited to subtle badging. And inside, the cabin is unchanged, save for extra 'Electric' and 'Battery Level' menus in the MBUX infotainment system. In a CLA, you sit a little lower than you would in other compact Mercedes models, on black leather-stitched sports seats with integrated head restraints which position you lower in front of a race-style flat-bottomed nappa leather-trimmed steering wheel. And you're surrounded by premium touches; a glossy piano black-coated centre console that flows up into the dash; and intricately fashioned door cards filleted with aluminium and double-stitched hide panels. Luxury downsizers will love it. In standard spec, you get a couple of 7.0-inch infotainment screens - one in front of the driver for the instruments and a centre-dash one for the infotainment functions. Pay extra and you can have both these displays uprated to 10.3-inches in size. Fashion is the keynote here - which is why you access the rear through lovely frameless doors, just like a pricey CLS model in the next class up. Negotiate around the plunging roofline and get yourself inside though and it is a little surprising to find that despite this car being 9mm longer than a current W205 generation Mercedes C-Class saloon, it offers significantly less space for rearward passengers. Boot space is around 400 litres for the CLA Coupe 250e and around 445-litres for the Shooting Brake version. That's around 60-litres down on a conventionally-engined model.

Mercedes has priced this CLA 250e plug-in at about the same level as the top CLA diesel, the 190hp CLA 220d, which costs around £36,000. For trim, you'll need to choose one of the 'AMG Line' variants. There's 'AMG Line', 'AMG Line Premium' and 'AMG Line Premium Plus'. 'AMG Line' trim includes AMG alloy wheels of at least 18-inches in size, plus an AMG body styling kit. Inside, all variants get cool ambient lighting, a black roof liner, stainless steel sports pedals, AMG floor mats and a multi-function nappa leather-stitched sports steering wheel. Along with two-zone THERMOTRONIC air conditioning, a wireless 'phone charger, an auto-dimming rear view mirror, heated front seats, cruise control and a speed limiter. As usual with a Mercedes, there's also the 'DYNAMIC SELECT' driving modes system, which allows you to adjust throttle response, steering feel and gearshift timings to suit the way you want to drive. The real CLA cabin talking point though, is the clever 'MBUX' ('Mercedes-Benz User eXperience') multimedia infotainment system, which is controlled by two high resolution screens. With base 'AMG Line' trim, you get a 7-inch one for the instrument cluster and 10.25-inch touchscreen media display in the centre of the dash. The 'MBUX' system is built around the brand's 'Hey Mercedes' voice activation system, which you'll quickly find yourself using to operate many of the interior features. These include a six-speaker 100-watt DAB audio set-up, Bluetooth, 'Apple CarPlay/'Android Auto' smartphone-mirroring and a 'Live Traffic Information' feature that's free for the first three years of ownership.

The 15.6kWh battery can be charged with AC or DC current via a socket located in the right-hand side wall of the vehicle. This CLA 250e can be charged at a 7.4kW wallbox with alternating current (AC) within 1 h 45 min from 10-100%. For direct-current (DC) charging at 24kW, the battery can be charged from 10-80% in around 25 minutes. Keep everything charged up and Mercedes reckons that 90% of regular commuting journeys can be completed without using the petrol engine. One important comfort feature is the pre-entry climate control prior to starting a journey, which reduces energy usage and can also be activated conveniently by smartphone. The quoted WLTP combined cycle fuel figure for the Coupe variant is 188mpg and WLTP CO2 emissions are rated between 31-35g/km. For the Shooting Brake estate variant, the figures are 177mpg and WLTP CO2 emissions are rated between 38-42g/km The MBUX infotainment system assists the driver in finding charging stations. Just start a search simply by saying "Hey Mercedes, find charging stations nearby". Via the 'Mercedes me Charge' system, drivers of this plug-in hybrid model can optionally obtain access to one of the world's largest charging networks, with over 300 different operators in Europe alone (municipalities, car parks, motorways, shopping centres, etc.). Thanks to navigation, Mercedes-Benz customers can find these stations easily and can gain convenient access to the charging stations via the Mercedes me Charge card, the Mercedes me App or directly from the car. No separate contracts are necessary for this: apart from simple authentication, customers benefit from an integrated payment function with simple billing after they have registered their payment method once. Each charging process is booked automatically. The individual charging processes are clearly listed in a monthly invoice.

If you're looking at a Mercedes CLA, then you'll probably have already adjusted to the idea of paying a premium for its fashionable design. In which case, finding a touch more to get the trendy plug-in tech offered by this CLA 250e variant might not be too much of an extra stretch. After all, there's lots to like here; superb refinement, clean emissions that lead to super-low BiK taxation and the appealing prospect of largely fuel-free commuting mileage. Even as it is, this CLA 250e could make more sense than a conventional diesel or petrol version of this model once you add up whole-life costs on a finance deal. The era of plug-in hybrid technology may be relatively short-lived - much of Europe plans to ban hybrid engines by 2035 - but right here, right now, it's the approach to electrification that makes most sense for an awful lot of buyers. But upfront costs need to be driven down if wider consumer uptake on PHEV models like this one is to be realised. If you don't mind paying the premium though, with a CLA 250e, you'll get a premium package in return.