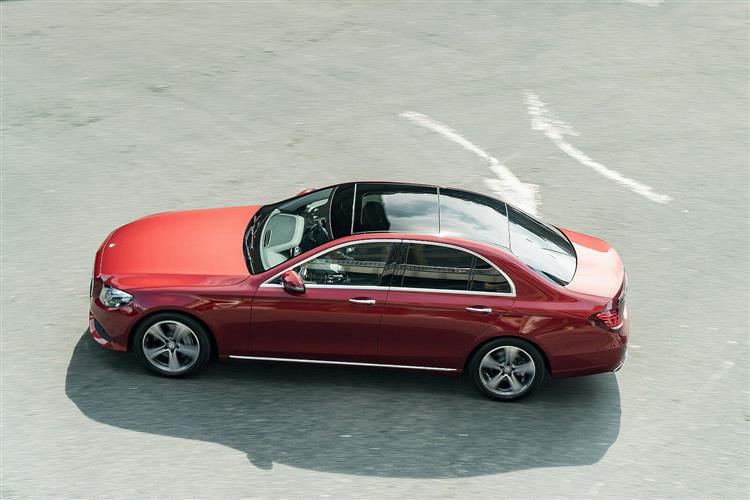 The Mercedes E-Class Estate has always been a very classy way to carry rather a lot. Now it's better-looking, cleverer and more efficient than ever. A focus on downsized engines will be a big draw and the development of a fire-breathing E63 AMG model adds some excitement, but the whole range just feels slicker and more desirable than ever. It's all very impressive, particularly as you can still carry up to around 2,000-litres.

It used to be that if you wanted a large, plush practical estate, you bought a big Volvo. For some years now though, that role has been only fully filled by the Mercedes E-Class Estate. Rivals trade space for a bit of style but this car continues to prioritise practicality, with nearly 700-litres of room on offer even before you start folding seats. This generation E-Class Estate first appeared in 2009 and received a series of rave reviews. In truth, not a lot needed doing to it, but Mercedes has taken the opportunity to burnish its appeal still further, improve the efficiency of its engine line-up and really go to town on the halo model of the range, the astonishing E 63 AMG. In its own subtle way, the E-Class station wagon has slyly morphed into something you could really covet.

This generation car might appear to concentrate on aspects other than the driving experience, but Mercedes has taken the opportunity to develop the E-Class into a much better-riding vehicle. You'll need to pay attention when specifying the car as there's a tonne of choice available. Even the suspension choices can be dizzying, with the comfort-oriented DIRECT CONTROL suspension with selective damping system, a version of this with a 15mm lowering, an AMG Sports version and the AIRMATIC suspension that's fitted to the V8 cars. All of the models of the E-Class family get an electromechanical Direct-Steer system as standard. There's a wide variety of engine choices, with an increased focus on efficient four-cylinder units. The E200 and E250 petrol models get 2.0-litre fours that develop 184 and 211PS respectively and both get stellar economy figures and deliver decent acceleration. They're a long way removed from the rough Kompressor fours of the past. Diesel buyers choose between the 2.1-litre four-cylinder E200 CDI (136PS), the E220 CDI (170PS) and the E250 CDI (204PS), or else there's a 3.0-litre V6 E350 Bluetec with a healthy 252PS. There's also an intriguing diesel/electric hybrid, the E300 Bluetec Hybrid, that features much the same engine as used by the E250 CDI but with a 26PS electric motor added.

The practicality of this car hasn't changed with this mid-term package of revisions. So you still get 695-litres of space with the rear bench up and 1950-litres with the back seat flattened. In other words, this is still the most practical choice in the Executive estate class. Some might have thought this car earned that accolade as a result of styling a tough frumpier than that of svelte rivals like Audi's A6 Avant, BMW's 5 Series Touring or the Jaguar XF Sportbrake. And it's at these people that the most recent aesthetic wash 'n brush-up is aimed. The first thing you'll probably notice are this model's revised headlights. And what a set of headlights they are, comprising all the functional elements within a single lens. Flowing light elements within the headlamps ensure that the "four-eyed" look which is typical of the E-Class has been retained. The lamp units are fitted with partial LED lights as standard, while full LED technology is available for the first time in this class as an option. You need this. It gives the car a light signature that's really striking. The interior has come in for some budget, with better quality upholstery and a two-part trim which stretches across the entire dashboard. It can be selected in a wood or aluminium look, irrespective of the equipment line. You'll also notice a neater three-gauge instrument cluster, part of a much smarter display, complemented by a redesign for the two central air vents, between which sits a lovely analogue clock, specially branded in the top AMG model.

Expect to allow a premium of at least £35,000 for E-Class estate ownership, which represents a premium of just under £2,000 over the saloon model. Overall, that's pretty competitive against rivals like the Audi A6 Avant, the BMW 5 Series Touring and the Jaguar XF Sportbrake. Lottery winners can pay up to around £75,000 for the top E63 AMG variant. The range has been re-jigged to make it easier to understand, with a two-trim line-up acting as the foundation. Entry level is the discreet SE guise which comes with 17-inch alloy wheels, partial LED headlights, a DAB digital radio, ActivePark assist with Parktronic, Collision Prevention Assist and the COMAND Online infotainment system. Choose an AMG Sport model and you get 18-inch five-spoke alloys and sports seats with dynamic side bolsters. One of the key pieces of technology in this latest E-Class is the Collision Prevention Assist, a radar-based warning system with adaptive brake-assist. The sheer amount of sensor technology that can be specified into the E-Class is quite astonishing, with both long and short range radars and a stereo camera with smart software that recognises pedestrians at road intersections. Equally impressive are the fully integrated social media functions that can be specified. Got an iPhone? You can integrate pretty seamlessly. On Android? No such luck. Black mark, Merc.

There's not much of a running cost penalty for choosing an E-Class Estate over the saloon version. And it helps that the focus on economical four-cylinder models has meant that the average cost of running an E-Class has tumbled. Mercedes even trumpets the V8 E63 AMG model as the most efficient powerplant of its type. Go for a four-cylinder unit and you're looking at 45.6mpg from the petrol E200 and E250 models, with emissions from 144g/km to boot. Choose a diesel engine and economy ranges from 55.4mpg for the E220 CDI to 45.6mpg for the E350 Bluetec V6. The diesel/electric E300 Hybrid nets 62.8mpg and 119g/km. Even the E63 AMG doesn't turn in too catastrophic a performance at the pumps, averaging 28.3mpg and emitting 234g/km. Drive it as designed and your figure may well dip somewhat. Residual values are some of the best in the sector, although you will have to keep an eye on options pricing if you want to keep a cap on your pence per mile figures.

Before this improved E-Class estate appeared, the Mercedes of executive station wagons was perceived as a practical but slightly over-sensible choice in this sector. These days though, it's a much smarter choice - in more ways than one. Today, it feels like a car that's pricey but which offers a compelling value proposition. It drives with genuine polish, yet is capable of stepping from cruiser to carouser without breaking a sweat. Operating the car is relatively easy and you rarely feel as if this Mercedes is imposing its will on you, unlike certain rivals I could mention. The abiding impression is that this is a very carefully considered vehicle, developed by a company steeped in a proud engineering tradition. If you want to carry properly hefty loads in a car of this kind yet want to do so with more than a modicum of style, this is one to place right up there with its premium rivals. Better by design.