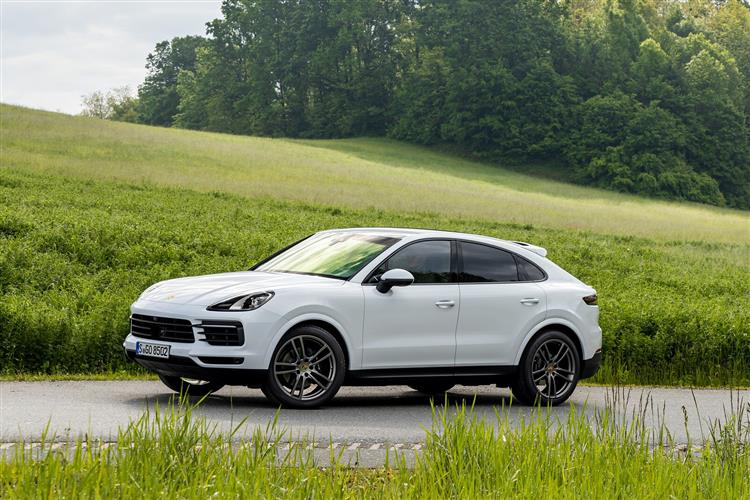 You don't need a Porsche Cayenne Coupe, but we're guessing you'd really, really like one. As the name suggests, this is a sportier-looking version of the standard Cayenne large SUV and it's been engineered with all the same Porsche thoroughness. Which means that it's the very first large SUV Coupe model the market's been offered with handling that can really match the arresting looks that tend to be common in this segment.

Is this Porsche Cayenne Coupe really the answer to a question no one was asking? That's what the car magazines say. But, as so often, they're wrong. Actually, quite a considerable number of well-heeled folk have been asking for a large luxury SUV with a sporting coupe-style look. That's why BMW's X6, the car that started this trend, is now in its third generation and Mercedes has just launched the second generation version of that car's closest rival, the GLE Coupe. Porsche wants a slice of that action too, hence the need for this Cayenne Coupe. You actually wonder why the brand didn't do this before. Its conventional Cayenne SUV has always been the most sporting model in its segment. If its sharp handling prowess could be transferred into a sector rather in need of sharp handling prowess, you'd think fireworks could be in prospect.

You might not be surprised to hear that a Cayenne Coupe drives almost exactly like an ordinary Cayenne. Of course, the standard Cayenne isn't 'ordinary' in the way it hurls nearly 2.3-tonnes of Zuffenhausen real estate up the road. Porsche reckons this variant is even better because of its fractionally lower centre of gravity, though any difference, is there is any, is virtually impossible to detect - on the public road anyway. As with the conventional car, the steering is on another level to what you get from large SUVs from most other brands, being meaty and direct. And, as on the conventional car, you get the option of 'PDCC' 'Porsche Dynamic Chassis Control' that features active anti-roll bars that aim to reduce body lean at speed through the corners. Through those bends, traction can be maximised if you paid for the 'PTV Plus' 'Porsche Torque Vectoring Plus' rear differential and the rear wheel steer axle. As in the straightforward Cayenne line-up, the engine range kicks off with a turbocharged 3.0-litre V6 petrol unit developing 330PS. Next up is the Cayenne S, which gets a twin-turbocharged 2.9-litre V6 good for 440PS. At the top of the range is the Cayenne Turbo, which gets a 4.0-litre twin turbo V8 putting out a potent 550PS. There are also two plug-in variants making up for the lack of a diesel: first the 462PS E-Hybrid and, for the really high rollers, a top Turbo S E-Hybrid with 680PS.

That sloping roof line trims around 20mm from the height of a normal Cayenne and to even things out, a few extra millimetres of length and width have been added here and there. The result, to most eyes, is much more elegant than either a BMW X6 or a Mercedes GLE Coupe - but then, those cars are supposed to have an 'in your face' demeanour; in a way, that's the point of them. A Cayenne Coupe doesn't bother with pavement theatrics of that kind, though it's equally style-conscious in its own rather more mature way. Take for example, the two available roof options - a full length panoramic glass affair or a carbonfibre panel with a 'double bubble' finish similar to that of a 911 GT3 RS. Various 'Lightweight Packages' can also be specified, each offering various carbonfibre interior and exterior trim elements and seats with a combination of alcantara and checked cloth upholstery. Up front, it's basically the same as a normal Cayenne, but in the rear, the normal bench makes way for a couple of individual seats, separated by a storage tray and a couple of cup holders. If you need the occasional option to take three, a '2+1' layout can be specified at extra cost. Out back, as you might expect, the boot has shrunk in size - from 745 to 625-litres - though folding the rear chairs liberates 1,540-litres, only 138-litres down on the standard car.

Prices open at around £62,000 for the standard 3.0 V6 340PS petrol Cayenne (everything in the range is petrol-powered), that fee representing a premium of around £5,000 over the equivalent version of the standard model. Next up is the E-Hybrid plug-in version, at around £71,500, followed by the Cayenne S Coupe, which uses a 440PS version of a 2.9-litre V6. There's then a big price jump to the Cayenne Turbo Coupe, which uses a 550PS V8 and costs around £105,000. The top Cayenne Turbo S E-Hybrid Coupe weds that V8 with plug-in technology, puts out 680PS and costs a cool £126,000. At least it's also hard to argue with the amount of kit all versions of this car get as standard. There's a full leather interior, Porsche Active Suspension Management (PASM), Bi-Xenon headlights, front and rear ParkAssist, tyre pressure monitoring, automatic dimming rear view mirrors, Porsche Communication Management with touch-screen satellite navigation and audio controls, cruise control and a three year warranty. That's on top of a Porsche Vehicle Tracking System (VTS). There's also a clever cruise control system that takes into account speed limits, bends and inclines.

The big ticket item on any Cayenne has long been depreciation, but then that's not an issue exclusive to Porsche. Show us one large SUV that retains its value well. The pace of change has been dizzying in this sector and older SUVs date rapidly due to advances in engine efficiency. Look at the prices or early petrol-engined Cayennes for evidence of this. Porsche has made big strides in improving fuel economy and driving down emissions with this model - principally with its Plug-in hybrid technology. Expect a CO2 figure from the E-Hybrid variant of up to 72g/km (NEDC). When connected to an industrial outlet, the batteries can be charged within around two and a half hours via the integrated on-board charger and the standard Porsche Universal Charger (AC) and it can be charged in less than four hours when connected to a conventional household electrical outlet. Fuel consumption for this variant is WLTP-rated at up to 70.6mpg. As for the mainstream versions, well the base 3.0-litre V6 Cayenne Coupe manages between 22.2 and 23.9mpg on the combined cycle and between 212 and 215g/km of CO2 (variance depending on spec and wheel size). For the twin turbo 2.9-litre Cayenne S, the figures are between 21.9 and 23.7mpg and between 212-216g/km. And for the Cayenne Turbo, you're looking at between 20.2mpg and 20.8mpg, with CO2 readings between 258-261g/km. We would imagine 'real world' consumption on that top variant is likely to be a good deal scarier.

Why is the motoring press so disparaging towards car like this? Increasingly, people aspire to them just as much as to a Porsche 911 or a Ferrari 488. Ideally of course, you'd have sportscar and sports SUV and if your oak-timbered garage was fortunate enough to accommodate both a Cayenne Coupe (preferably a Turbo) and a 911, we reckon your motoring life would be pretty well covered. The technology on offer here is awesome - rear wheel steering, air suspension, anti-roll systems and so on - but even if you don't stretch to it, you'll still get a car that dynamically, redefines what's possible in its segment. Just as Porsches always have.