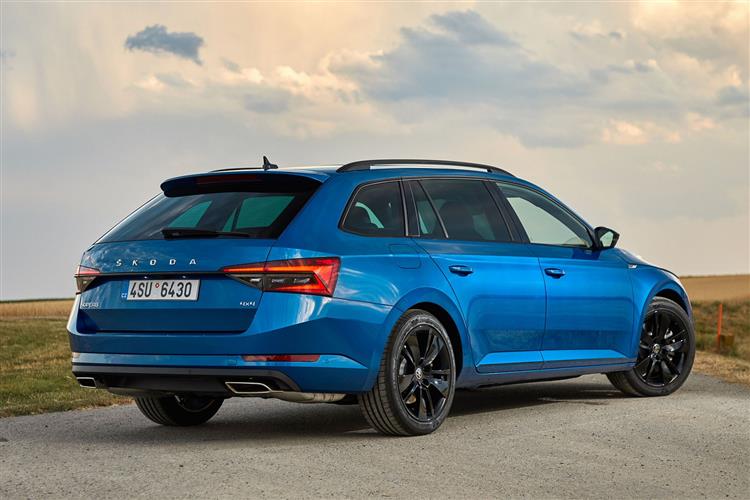 If you want a really big station wagon that doesn't come with the kind of premium pricing you'd get with cars of this kind from Volvo or the top German brands, then there's not much to touch Skoda's Superb Estate. This improved version of the third generation design is smarter and more sophisticated, yet still very large, both for passengers and packages. It's still probably the most practical choice in the segment.

Skoda's Superb has always traded on being big. The standard hatch model's key showroom attribute has always been the astonishing levels of rear seat legroom it offers - plus its big boot. The car's always been the perfect starting point then, for the creation of a really huge estate model, something the Czech brand introduced with the second generation version and continues with here in this much improved MK3 model. This design uses the Volkswagen Group's hi-tech MQB platform, which allows it to be bigger, yet still lighter than its predecessor. Sure enough, there's a big 660-litre boot with the seats up and nearly 2,000-litres of space with the rear bench folded down. We're almost into large MPV territory here. Al this from a smart executive-style estate with no frumpy People Carrying connotations. As before, it's priced at the level of a Ford Mondeo or Vauxhall Insignia-style 'D-segment' estate, yet offers even more room than you could expect from a much pricier large Executive class station wagon - say a BMW 5 Series Touring or an Audi A6 Avant. In other words, there's plenty to like here.

As you'd expect, this updated Superb Estate has been fitted out with the latest suite of Volkswagen Group engines and these are all mated to DSG auto transmission, demand for manual gearboxes in cars of this size having petered out somewhat. The petrol range kicks off with a 150PS 1.5-litre TSI EVO unit. Next up is a revised version of the 2.0-litre TSI powerplant with 190PS; and the top petrol powerplant is a 2.0-litre TSI engine developing 272PS, which comes with all-wheel drive as standard. In the diesel line-up, the starting point is a 122PS version of the usual 2.0 TDI unit. Next up is a heavily revised 2.0-litre 150PS diesel unit now badged 'TDI EVO'. Beyond that is the 2.0 TDI 190PS unit, which can optionally be ordered with all-wheel drive. You can also now have a Superb iV plug-in hybrid model, powered by a 1.4 TSI petrol engine that delivers 156PS and is boosted by an 85kW electric motor. The combined maximum power output of the two power sources is 218PS - which promises to deliver exceptional performance along with significantly reduced fuel consumption and emissions. On the move, as ever in a Superb, the ride and refinement are exemplary and the dynamic demeanour of the car is sharper than you might expect, thanks to its light, stiff MQB chassis. As a result, the car feels surprisingly agile through bends you'll be able to attack with reasonable gusto thanks to feelsome steering and a standard XDS+ Electronic Differential Lock that reduces understeer and improves stability as you turn.

Visual changes to this revised version of Skoda's third generation Superb Estate are relatively slight; you'll need to be a brand enthusiast to note the smarter, narrower full-LED headlamps and tail lights, plus the restyled bumpers and revised badging. The front grille now bears double slats, is larger and protrudes a little further down into the front bumper. At the rear, a horizontal chrome trim strip, which connects the full LED tail lights and the new 'SKODA' block lettering, might catch the eye, as might the smarter 18 and 19-inch wheel designs. You'd probably never use the word 'stylish' in describing this car, but the overall looks are certainly handsome in a slightly Germanic way. Inside, if you owned an earlier version of this MK3 model, you might notice this revised car's extra chrome highlighting, the revised seat covers and the extra decorative trims for the centre console and dashboard. Added 'Simply Clever' touches include a space organiser beneath the boot floor. And a 'Phone Box' system that allows for inductive handset charging. A fully digital 'Virtual Cockpit' instrument display screen is now optional too, replacing ther usual dials. As ever with a Superb, space for rear seat passengers is class-leading thanks to this MK3 model's lengthy 2,841mm wheelbase. Boot space is enormously large, 660-litres on offer with the seats up and a staggering 1950-litres available when the rear bench is folded down. Not even a huge Mercedes E-Class estate can beat that. Not only is luggage area spacious: it's also a very useful shape. There's a low load lip for the wide tailgate that stretches almost the entire width of the car. And a boot with very little intrusion from the rear wheels and suspension.

Potential Superb Estate buyers will not be short of choice. You're looking at having to find a premium of £1,320 if you want this station wagon bodystyle rather than the standard five-door hatch model. That means price ranging in the £26,000 to £42,000 bracket through four familiar trim grades; 'SE', 'SE L', 'SportLine Plus' and 'Laurin & Klement'. Plus DSG auto transmission is now standard across the line-up. As before, all models in the range feature high levels of standard equipment, with every variant including full-LED front and rear lights, along with seven airbags, a touchscreen infotainment system with DAB, voice control and Skoda's 'SmartLink+' set-up for 'Apple CarPlay'/'Android Auto' smartphone connectivity. The most popular variants are the 'SE' models which come with 17-inch alloy wheels, dual-zone climate control, front and rear parking sensors and electrically folding door mirrors with boarding spot lighting. In terms of driver assistance, 'SE' models come equipped with Adaptive Cruise Control, Light assistant and Driver fatigue sensor as standard. Business customers opting for the 'SE Technology' derivatives benefit from leather upholstery and heated front seats, Light Assist with high beam control, Blind Spot Detection and the brand's 'Amundsen' infotainment system with touchscreen display and integrated Wi-Fi. 'SE Technology' models are also equipped with Drive Mode selection allowing you to tweak throttle, steering and gearchange feel to suit the way you want to drive.

Skoda has forged its modern-day reputation on building quality cars that aren't expensive to run. Here's another one. As before, there's an 'Energy Recovery' set-up to reclaim energy that would otherwise be lost under braking or during cruising. And the usual Start/stop system to cut the engine when you don't need it, stuck at the lights or waiting in traffic. Plus the driver can do his or her bit by keeping an eye on the gearshift indicator on the dash. All these things of course aid the WLTP efficiency returns you'll get. The 2.0 TDI 122PS Estate manages up to 56.5mpg on the combined cycle and up to 131g/km of CO2; for the 2.0 TDI 150PS version, the figures are little different - 56.5mpg and 132g/km. For the 190PS model, the figures are up to 48.7mpg and up to 153g/km of CO2. For the 2.0 TSI 190PS petrol Estate, the figures are up to 38.2mpg and 168g/km. If you really want to drive down your running costs ,it's worth asking your dealer about the Superb iV plug-in hybrid model, powered by a 1.4 TSI petrol engine that delivers 156PS and is boosted by an 85kW electric motor. This offers CO2 emissions of up to 33g/km, along with an all-electric, zero-emission range of up to 35 miles thanks an integrated 13kWh battery.

There are lots of SUVs and MPVs to tempt family car buyers at the moment but there's life in the traditional estate car yet. Skoda's improved Superb Estate might not be the trendiest option your family could choose but its luggage-carrying potential is vast and the rest of the package stacks up very well too. This third generation Superb is well provided for in technology, efficiency and style and in 4x4 guise really would make a more sensible alternative to a much smaller but similarly-priced compact SUV. So there you have it. If you've £28,000 to £40,000 to spend on something spacious but not too frumpy, you'd probably quite like one of these. Your Czech mate? Quite possibly.