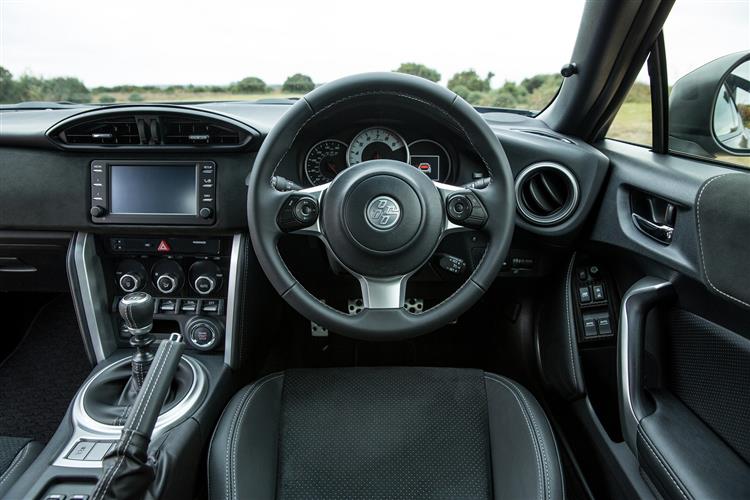 If you thought involving affordable sportscars belonged back in history, then you'll find Toyota's GT86 a welcome breath of fresh air. Developed and desired by enthusiasts, it remains a benchmark in the compact coupe sector, a masterclass in driving dynamics. These days, it's even better.

The GT86 formula is simply classic: a snarly, high-revving four-cylinder engine in the nose, rear-wheel-drive, 2+2 seating, a swoopy body, a stubby gearlever and a cosy cabin with low-slung sports seats. Subaru's version of this design, the BRZ, is mechanically identical but looks a little different, plus there is a third version for the American market called the Scion FR-S which has been subtly altered again. Common to all the variants however, is a 197bhp, 151lb ft flat four engine that uses a Subaru block and Toyota-designed cylinder heads that's been designed to spin to 7000rpm and direct its output to the road via a six-speed manual gearbox - though auto transmission is an option. So it's Old School with a modern execution - and has remained so with the various improvements that Toyota has made over the years.

This is pretty much the same car that Toyota launched back in 2012, but updates since then have included revised suspension that improves corner turn-in and a selectable 'track' mode that lets the driver tap into the GT86's full potential by adjusting the level of stability and traction control, including a 'fully off' option. Under the skin, the body structure is a little stiffer than it once was, and the Showa shock absorbers have been retuned in recent years for better handling and ride comfort. Plus there's a range of more focused 'Club Series' models - which is what we tried. The 2.0-litre Boxer engine beneath the bonnet remains, as does the relatively light 1,180 kg kerb weight which might lead you to expect the GT86 to make rather more of its 197bhp and 151lb of torque than the estimated headline performance stats of 140mph and 0-62mph in 7.6s suggest. But this car isn't just about raw power. Its lean kerb weight plays just as big a role in the way it handles and rides. A limited slip differential is also fitted as standard, reaffirming GT86's essential 'driver's car' character. And, in this respect, all the ingredients look especially promising: quick steering and relatively low-grip tyres ensure that outright traction never overwhelms the desire to play the angles, should the driver so wish. Back-to-basics fun was always at the heart of the brief for this car. Disappointments? A short-throw gearchange that's a tad notchy and a six-speed auto option that, while smooth, lacks the snappy alacrity of the best double-clutchers. But that's about it.

This remains a very good looking car indeed. Little touches help; the stylised 'teeth' along the bottom edge of the lower grille, the piercing LED headlamps, the smart, deep rear bumper design, the aero-stabilising side fins. If the styling still isn't daring enough for you, then optional side, roof and bonnet decals are available in black or silver to add an extra dimension to GT86's sporting appearance. You can order your car with or without a rear spoiler. And there are more eye-catching 'Blue Edition' 'Club Series' models available for those wanting to rediscover their inner track hero. Inside, the driving environment should certainly help get you in the mood, with its low-slung bucket seats and driver-centric control layout, not to mention the drilled pedals and footrest. You'll like the grippy three-spoke steering wheel, the smallest yet deigned for a production Toyota (diameter 362mm). A 4.2-inch TFT multi-information display is included in the instrument binnacle's triple-dial arrangement, with a switchable menu that provides performance-focused data, such as power and torque curves, stopwatch and a G-force monitor. As before, there are usable rear seats and a reasonably-sized 243-litre boot.

There's now no stripped-out entry-level variant, so prices start up at around £28,000 for the standard model - or you can find another £1,150 more to get the plusher 'Pro' version with its leather/alcantara heated seats, rear spoiler and sporting suede-effect finish for the dashboard and door trims. Pro trim offers the £1,800 option of paddleshift automatic transmission. And even the standard GT86 is well-equipped, featuring 10-spoke 17-inch alloys with a machined finish, adaptive LED headlights, cruise control, powered heated door mirrors with a folding function, aluminium sport pedals, high-performance brake discs and pads, hill start assist and smart entry with push-button start. If you've a £30,000 baudget, there's also a 'Club Series Blue Edition' model, available in standard or 'Performance' guises, with or without auto transmission. All GT86 models feature the Toyota Touch 2 multimedia system with Bluetooth, 6.1-inch touchscreen and a DAB tuner. As an option, the system can be upgraded to Toyota Touch 2 with Go, adding satellite navigation, connectivity giving access to on-line services and social media channels, and three years' inclusive map updates. Active safety provisions include a switchable VSC stability control system, which can be adjusted through three driving modes to suit driver preference, and a torque-sensing limited slip differential. Seven airbags are provided, including a driver's knee airbag.

You might be tempted by this car and then wonder if the GT86 is going to cost an arm and a leg in depreciation compared to something with a premium badge, say an Audi TT Coupe. A car with four rings on its bonnet has to be a safer home for your money right? Wrong, as it happens. Buy an entry-level TT and it'll be worth 49 per cent of its new price three years down the road. BMW's 220i Coupe? That retains around 43 per cent. The GT86? Try 58 per cent for size. And the news keeps on getting better when you come to examine day-to-day running costs. The GT86 is reasonably economical. Yes, we know that the published figures are usually a bit of a farce that you'll never get near, but Toyota quotes 33.2mpg on the WLTP combined cycle for the manual (or 32.8mpg for the auto) and every person we know who's run one has reported averages of over 30mpg. Emissions aren't quite so clever at 191g/km (NEDC) for the manual car (or 193g/km for the auto). Finally, all this is backed up by Toyota's excellent aftermarket care package that includes a five year 100,000 mile warranty. What's not to like?

Could this car be any better? Of course, it could be faster, grippier, quieter and of better quality inside. But personally, we wouldn't really want it to be. All of those things would dilute the very qualities that make this GT86 what it is. Sportscars always used to be this way, light, low powered and modestly rubbered. We had fun in them then and we can have fun in this one now. The chassis is excellent, the controls are brilliant, the driving position nigh-on perfect and the engine, if not aurally exciting, is revvy and fun. So, what we have here is something to savour; one of those rare machines that involves you so much that you don't need to be travelling at three figure speeds to have fantastic fun. Factor in the affordable running costs and high residuals and this becomes a very tempting proposition indeed, especially in this current guise. In years to come, it'll be a landmark car for Toyota. Get one and you won't regret it.