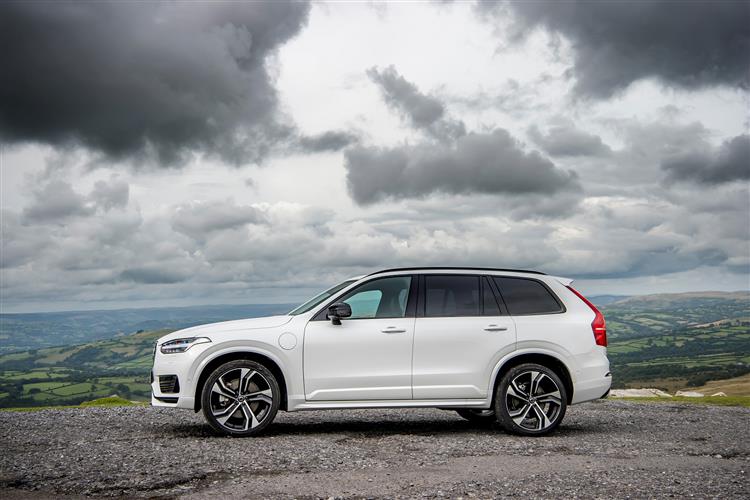 The second generation XC90 was a car that fans of the brand anticipated impatiently and what we got when it arrived was worth the wait. Absolutely everything about this MK2 model was fundamentally new and engineered to set fresh class standards. Nowhere is this more evident than with the Recharge T8 Plug-in hybrid petrol/electric variant we're going to look at here. Here, you get the potential of supermini-style running costs. On top of that, there's the sort of proper full-sized seven-seat versatility that few rivals can credibly offer and the kind of cool, authentic Scandinavian charm we haven't really seen from a new Volvo in a very long time. It all sounds promising doesn't it? Time to put this car to the test.

The 'Recharge T8' badging applied to this car denotes its petrol/electric powertrain and plug-in hybrid usability. In fact there are three engines if you're going to be pedantic about it and count the 25bhp starter motor/generator that pitches in from time to time to smooth any gaps in torque delivery between the two main power sources. One of these is the 303hp turbocharged/supercharged petrol unit borrowed from the conventional T6 model that drives the front wheels. In an XC90 T8 though, it's assisted by a separate engine at the back, an 87bhp electric motor powered by a battery pack neatly packaged away in the transmission tunnel. It's all enough to deliver a set of stats that it's rather hard to get your head around. So, 386hp and 62mph from rest in just 5.8s - the kind of storming performance you'd get in this segment from, say, a Porsche Cayenne S - matched with real world fuel and CO2 readings that could potentially equal those of a frugal supermini. That's assuming you select the most performance-orientated of the five driving settings that T8 owners are offered - the 'Power' mode that sees both petrol and electric units permanently working together. Alternatively, there are four other drive choices: a 'Hybrid' setting that sees the two engines cutting in and out as necessary: an 'AWD' mode that gives you permanent 4x4 traction off road: plus a 'Pure electric' setting that only uses the battery power and can take you up to 26 miles (more than most people's daily commuting distance) on a single charge. There's even a 'Save' option so that on a longer trip, you can hold that charge until you get to the city driving you might have to do at the end of the journey.

The look of this second generation XC90, according to its exterior design manager Anders Gunnarson, needed to be 'timeless'. If, like its predecessor, its model life must stretch across the decades, then you can certainly see why. Hence the considerable depth of thought that's clearly gone into a sense of style reflective of brand values both old and new. So many large luxury SUVs appear bulky and intimidating: this isn't one of them. On the outside, this refreshed XC90 offers subtle upgrades to the original award-winning exterior design, such as new wheels, exterior colours and a revised front grille, among other details. Otherwise, things are much as before, with a sculpted bonnet flowing into LED front headlights with a distinctive so-called 'Hammer of Thor' design. Up-front, the cabin is simple, elegant, very uncluttered and dominated by a huge infotainment colour touchscreen that's presented portrait-style on the centre console. We like the technical niceties too: the CleanZone interior air quality system for example. This automatically switches to recirculation mode if outside conditions change - say in a polluted city centre or when you enter a smoky tunnel. Middle row passengers get individual seats that slide and recline for greater comfort on longer journeys. And even third row folk get decent standards of space. Unlike a rival Audi Q7 e-tron, you can have third row seating in this XC90 T8 model. Out back, there's 397-litres of luggage space with all the seats in place, or 775-litres up to the windowline with the third row folded.

The on the road price of this Recharge T8 Plug-in hybrid model lists from around £68,000. That means you can expect to pay a premium of around £10,000 over the comparable B5 diesel version. There are two main trim levels, 'R-Design' and 'Inscription', with iterim 'Pro' variants of each also available. Standard equipment levels are comprehensive. All models get smart alloy wheels of at least 19-inches in size, plus LED headlights that at night can bend with the road and dip themselves automatically. You also get roof rails, rear parking sensors, auto headlamps and wipers and a power-operated tailgate. Inside, there's full leather trim and a powered driver's seat, 2-Zone Electronic Climate Control and a clever 'Sensus Connect' infotainment system you activate via a large 9-inch centre console touchscreen. From here (or via voice control), you can access a 10-speaker 330-watt High Performance Sound system with DAB digital radio. Plus there's a 'Sensus Navigation' system with Traffic Information and European mapping, plus, as you'd expect, Bluetooth 'phone compatibility and USB and aux-in ports. XC90 safety gear includes a run off-road protection package which tightens seatbelts and activates energy-absorbing technology in the seats when the car detects challenging terrain ahead. Another system is the auto-braking feature, which cuts in if a driver pulls out in front of oncoming traffic. Both safety systems aim to bring Volvo closer to its vision of nobody being seriously injured or killed in any of its vehicles by this century's third decade.

What if you could take the conventional XC90 T6 petrol model's very efficient turbocharged and supercharged 320bhp 2.0-litre petrol engine - then mate it to plug-in hybrid technology that included an 82bhp electric motor driving the rear wheels? You'd have the world's most powerful and cleanest SUV. More specifically, you'd have the most desirable variant in the XC90 range, this T8 Twin Engine variant. As with any plug-in hybrid, this car offers the option of charging from mains power. Owners will be able to buy a wallbox from Volvo that will charge their cars on 16-amp power in about two and a half hours. However you charge your T8, once it's powered-up, you can expect up to 28.6 miles of electric-only progress, providing you drive sensibly - more than the total distance most people drive in a day. Theoretically then, you could use an XC90 T8 every day without ever visiting a fuel station unless you needed to undertake a longer trip. This Volvo has quick acceleration too, allowing its driver to use all its 400 braked horses via a special 'power' setting. In everyday use though, most T8 owners will be driving in 'Hybrid' mode, a setting in which the vehicle will automatically alternate between petrol and electric power - and the basis for a faintly incredible-sounding set of WLTP running cost figures: up to 100.8mpg on the combined cycle and up to 63g/km of CO2. These are figures that'll reward a bit of thought if you're just about to blindly sign on the dotted line for a conventional diesel model.

Volvo seems to be flourishing under foreign ownership and this Recharge T8 Plug-in hybrid XC90 model is a good example of why. You might have expected Chinese company control to stifle the company's Scandinavian character. Instead, what we've been given here is a return to Swedish charisma and an emphasis on all the things that the Gothenburg brand does best - cool restrained style, real-world practicality and class-leading safety. Of course, this Volvo's not perfect. There are still sharper-handling choices and more capable off roaders in this sector. In balancing these virtues though, this XC90 sets its own class standard and in doing so, establishes a family benchmark amongst luxury SUVs that rivals will struggle to match. Add in the astonishingly low running costs that come with Plug-in hybrid technology and it's a difficult formula to resist if you're shopping in this segment. Company founders Assar Gabrielsson and Gustaf Larson would have liked this car. More importantly though, if you're shopping in this segment, we think you will too.