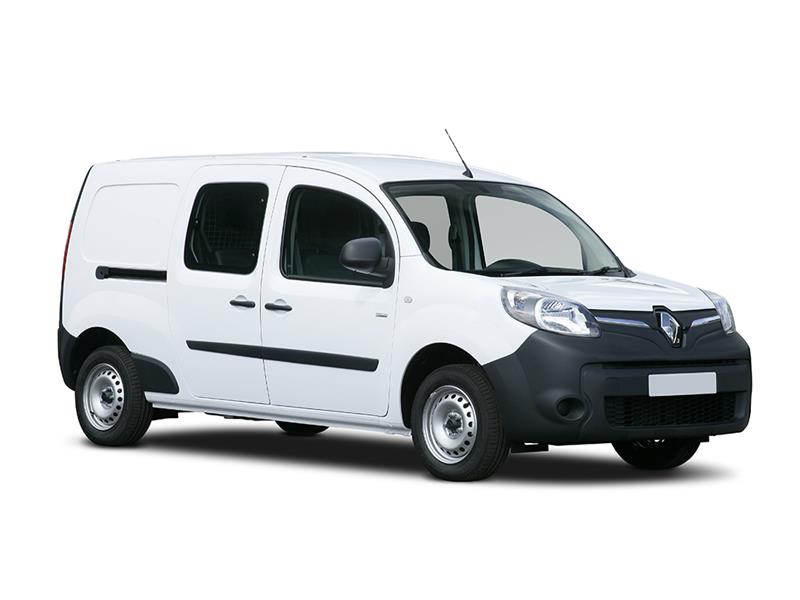 This completely redesigned third generation Renault Kangoo van aims to set fresh standards in compact van design - and in some ways it does. There are some genuinely clever features on offer here - though UK customers can't have all of them - mixed with more than a dash of Gallic flair.

'Renaultvation'. What on earth does that mean? Apparently, it's got something to do with a programme of innovation that the French maker has in mind for its most practically-orientated for models. Starting with this one, the all-new Renault Kangoo van. We haven't actually had a completely fresh generation of Kangoo models since 2007, so this one is a big deal. Full of all the most clever ideas that the Renault LCV design department's been working on over the last decade. Sadly we won't get all of these in right-hand drive models, but the improvement in the product we can have is evident amongst almost everywhere you look with this third generation version. Here, it will only be available - in the usual standard and Maxi wheelbase length sizes - as a van; continental markets continue to also get this model as a passenger-carrying MPV. As before, there's a full-Electric E-TECH drivetrain if you want it. The competition though is tough, not least from this Renault's most recently redesigned rival, the fifth generation Volkswagen Caddy. So, does 'Kangoo' mean 'can do'? Let's find out.

There's a choice of three diesel engines - 75, 95 and 115hp versions of Renault's usual 1.5-litre Blue dCi powerplant. And customers are also offered the company's 1.3 litre TCe petrol engine with either 100 or 130hp. The standard transmission choice is a 6-speed manual gearbox, but selected variants also offer the option of a 7-speed dual clutch auto. Most businesses are probably going to want the mid-range Blue dCi 95 diesel variant, which gets 5hp more than the equivalent version of the outgoing model. Renault says that all versions of this MK3 Kangoo are significantly quieter than their predecessors, thanks to the addition of extra sound deadening that better insulates the interior from engine and road noise. Taking a lead from some rivals, the French maker is now offering the option of a permanent rear view camera where the rear view mirror would normally be. And this third generation Kangoo also gets a decent dose of the camera-driven driving aids and camera safety equipment that its predecessor lacked - features like adaptive cruise control and blind spot monitoring. As before, there's also an all-Electric version, the Kangoo E-TECH, which offers a 101bhp electric motor and 44kWh battery with a range of 165 miles.

The Kangoo model line urgently needed a thorough visual redesign, which is what's been delivered here. In third generation form, it certainly looks a lot more modern, with a shorter bonnet and squarer lines. The large Renault badge on the nose (which conceals the charging socket on the E-TECH electric model) is flanked by headlamps incorporating the brand's signature C-shaped daytime running lights. And there are also smarter light clusters at the rear, where the left hand door has been made wider to improve access in tight spaces. There's an even bigger step forward inside, where just about everything that matters has been carried over from the current Clio supermini - steering wheel, dashboard, climate controls and the prominent infotainment touchscreen that appears further up the range. The cabin's more spacious too - now wide enough for the inclusion of an optional double passenger seat. If you need to carry more than two passengers, then it's worth checking out the Maxi Crew Van variant. A clever feature that Renault unfortunately hasn't been able to engineer into right hand drive Kangoos is the 'Open Sesame' side door. With this, the lack of a B-pillar, combined with the swivelling bulkhead and a flat seat makes for an opening so big (1,446mm) that you could load in items of up to 3.0-letres in length. That's disappointing, as is the lack of another clever feature, the 'Easy Life' glovebox drawer.

Think in terms of an asking price span of around £18,500 to £23,000 (ex VAT) for a dCi diesel Kangoo and you shouldn't be too far out. You'll probably need to budget around £21,000 for the Crew Van version if you need that variant's fold-out second seating row. Obviously, you'll need to pay a bit more if you want the full-electric Kangoo E-TECH; Once you've deducted the government's Plug-in Car Grant, the ex-VAT pricing for Kangoo E-TECH electric variants is likely to lie in the £23,500-£26,000, with a little more needed for the electric Crew Van version. We would want to keep some budget aside for the useful folding seat arrangement which sees the passenger chair collapse and the mesh bulkhead hinge to one side to leave completely flat floor that runs from the rear doors into the passenger foot well. Another nice optional touch is the 'Easy Inside Rack', an interior roof rack that can hold lengths of up to 2,500mm and folds down from the roof when it's needed - a more secure solution than a roof rack and one that keeps valuable items away from prying eyes. Safety provision includes up to six airbags and you can specify all kinds of camera safety stuff this time round, including Lane Assist, tiredness alert and automatic emergency braking. Choose the optional automatic gearbox and you can have adaptive cruise control too.

So, which Kangoo is going to suit your business? It isn't quite as straighforward as simply choosing the right body size - select either the 3.3m3 standard Kangoo van (up from 3.0m3 with the previous generation model) or the 4.2m3 Kangoo van Maxi (up from 4.0m3 before). That's because in each case, there's the option to specify a fold-forward front seat that can boost said figures by quite a lot; to 3.9m3 for the standard version and to as much as 4.9m3 for the Maxi variant. Choose carefully, making full use of this feature and you'll find that item lengths of over 3.0-metres can be transported within this van. As for the payload, well for the standard van, this is limited to around 600kgs, but and 'increased payload' option can boost this to around 800kgs, while the lengthier Maxi variant with this option fitted can take around a tonne. All models can squeeze in a standard Euro pallet thanks to the generous width between the wheel arches that all Kangoos share. You wouldn't have to lift said pallet too far off the ground to get the thing in either, thanks to a user-friendly loading height. As usual in this class, there's a sliding side door, with the option of a second on the opposite side. As for running costs, well, Renault says it's worked hard in this area; expect around 65mpg on the combined cycle and about 110g/km of CO2 from the volume dCi 95 diesel variant, while the TCe 100 petrol version manages around 50mpg and about 120g/km. The service intervals across the range though, aren't especially long. The all-Electric E-TECH version can be charged in as little as 42 minutes from an appropriately high-powered charger. A 3 year/100,000 mile warranty is provided, with no mileage limit for the first two years and roadside assistance for the entire duration. You also get a 3 year paintwork guarantee and a 12 year anti-corrosion warranty.

There's so much about this third generation Kangoo that represents a clear step forward. Efficiency, cabin design, styling, safety, connectivity. We think innovations like the new folding seat arrangement and the roof-mounted interior rack are brilliant. But, like other commentators, we're very disappointed that arguably this Renault's cleverest design feature, the B-pillar-less 'Open Sesame' side door, can't be offered to UK customers. Still, what remains on the Kangoo spec sheet certainly ought to catch the attention of UK businesses browsing in the segment for compact vans. If you're shopping in this class, make no mistake, this Kangoo has to be high on your list of contenders to try if you're to make the right buying or leasing decision. It turns out that 'Renaultvation' really does mean something after all.